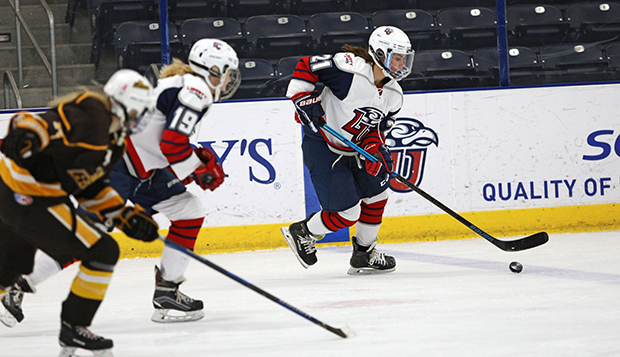 Ranked second, the Lady Flames were edged by the No. 1 Profs, 5-3 on Jan. 17 and 4-3 in overtime on Jan. 18 at the LaHaye Ice Center. Liberty (11-2) improved to 11-0 in CHE play and solidified its first-place standing with 3-0 and 2-0 wins over the Midshipwomen on Friday night and Sunday afternoon, respectively.

The Lady Flames outshot Navy 44-24 in Friday's opener, when sophomore forward Paige Arnosti started the scoring off assists from sophomore forwards Mary Catherine Stewart and Hope Stengler at the 14:33 mark of the second period. Junior forward and leading scorer Brittany Hegele broke the game open by scoring twice, late in the second off an assist from senior defenseman Alexis Early and midway through the third off a feed from junior defenseman Sarah LaPorte.

Sophomore goalie Madeleine Snook made 24 saves to record her third shutout of the season.

"Madeleine played extremely well and was the main reason we won both of those games," Liberty Head Coach Rena Leone said. "We only ran three defensemen and they played extremely well. They were definitely blocking shots and creating offensive opportunities on a couple rushes that helped get the momentum moving with the forwards."

In Sunday's rematch, it was more of the same as Liberty outshot the Midshipwomen 39-18 and Snook made 18 saves to record her fourth shutout, improving to 10-2 while lowering her goals-against average to 1.34 and raising her save percentage to 94.6.

Hegele ended the shutout with just 3:14 remaining in the second period off an assist from LaPorte, who added an unassisted insurance goal in the opening 1:18 of the third.

Liberty is off this weekend before traveling to California University of Pennsylvania for a regular-season-ending series Feb. 8-9. It will be seeded first and receive a first-round bye in the single-elimination CHE playoffs, set for Feb. 28-March 1, which will factor into the final ACHA DII Southeast Region rankings. The top four teams in the final Southeast, Northeast, and Midwest polls advance to the ACHA DII National Championships set for March 25-29 in Frisco, Texas.