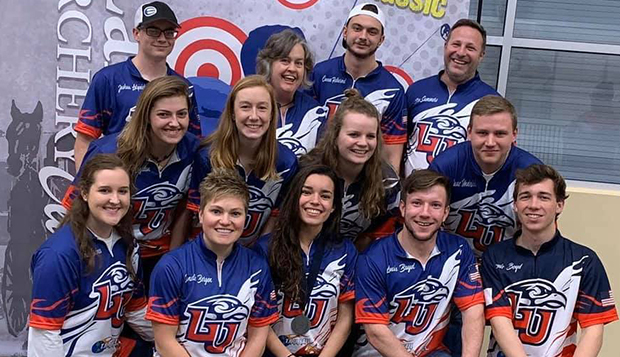 Liberty brought a strong contingent of archers to Lancaster, Pa., over the weekend. (Photos courtesy of Amy Skelton)

Liberty University's men's and women's archery teams prepared for the Feb. 28-March 1 USA Archery Collegiate Indoor Nationals at James Madison University with solid showings at the Easton Youth and Collegiate Trophy tournament over the weekend. The event, held in conjunction with the Lancaster (Pa.) Archery Classic that attracted close to 2,000 archers, drew over 500 collegiate competitors.

"We had amazing results on and off the podium, specifically in recruiting," Flames first-year Head Coach Ben Summers said.

Liberty archers placed seventh, 13th, and 19th in the women's compound division, won by an archer from Columbia University, who edged a Grand Canyon University archer currently ranked No. 1 in the world.

Sophomore Ben Williams, a first-year archer for the Flames, demonstrated excellent sportsmanship by judging his own arrow out of the bullseye circle after others had ruled it was in.

"He wanted to earn his score the right way," Summers said. "We're always telling our archers to score arrows accurately (because) integrity is more important than winning. I am thankful for the privilege of coaching such amazing student-athletes and we are glad to have real-life Champions shooting for Liberty."

Two Lady Flames alumna competed in the event, with one sporting her Liberty Archery jersey.

"We are doing our best to help alumni keep connected to their team," Summers said.

The team had dinner with incoming recruit Natasha Leininger, who plans to stream a live signing of her letter of intent to compete for Liberty at her state tournament in Texas in March.

Additionally, Dylan Pickenpaugh, a bronze medalist in the high school division, was so encouraged by his interactions with the Flames that he wore his Liberty sweatshirt on the podium an committed to compete for the Flames starting next fall. Another high school bronze medalist from Florida competed in a Liberty sweatshirt she purchased following her campus tour last week, when she and her family had lunch with Summers.

Over the weekend, Summers received one more online verbal commitment from a prospective student-athletes searching for a Christian education while competing for a first-class archery program. 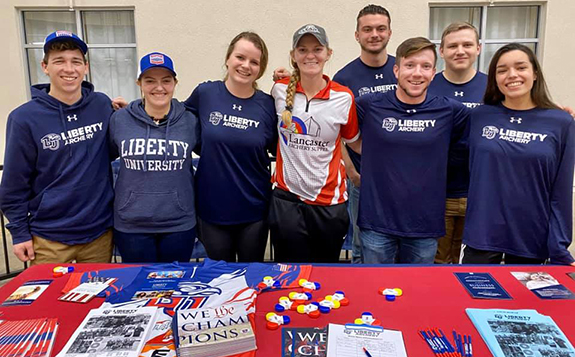