LaBarge will move from Alaska to anchor LU defense in fall 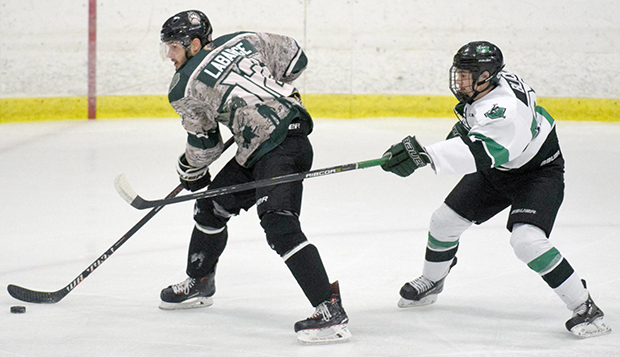 Trey LaBarge, who is 6-foot-1, 185 pounds, is a physical defenseman with the vision of a quarterback as he showed for the Kenai River (Alaska) Brown Bears, scoring 11 goals and distributing 14 assists in 68 games over the past two seasons.

Trey LaBarge, who has shifted back and forth from forward to defenseman for the North American Hockey League's (NAHL) Kenai River (Alaska) Brown Bears over the past two seasons, will play a defensive role when he joins Liberty University's ACHA Division I men's hockey team next fall.

"(Flames Head Coach Kirk Handy) really likes my defensive game so I am really excited about that," LaBarge said Wednesday as he prepared to travel from Amarillo, Texas, to Albuquerque, N.M., for an NAHL series against the New Mexico Ice Wolves this weekend. "He likes my versatility and that I am able to play wherever the team needs me."

LaBarge, who will turn 21 on Feb. 5, has scored 10 goals and distributed 13 assists in 61 games over the past two seasons with the Brown Bears after playing one and a half seasons with the Madison Capitols of the USHL.

"I start as a power forward or winger, but I'm the first guy my coach looks to to play back on defense," LaBarge said.

Liberty's coaches saw him play forward in the Blaine (Minn.) NAHL Showcase and realized his potential to help the Flames on both ends of the ice.

"I am a physical defenseman and like to move the puck up and try to join the rush as much as possible," said LaBarge, who is 6-feet, 1-inch, 185 pounds. "What I like about defense is shutting down other teams' offensive opportunities and being able to control the play when we have the puck on our end. I like seeing the entire ice as we break out and regroup, and being the quarterback of where I want the puck to go."

LaBarge, who plans to study electrical engineering, was sold on continuing his career at Liberty after flying to Lynchburg, Va., to stay from Dec. 15-17.

"My visit was awesome," he said. "Campus was absolutely gorgeous with all the activities going on. It seems like a great atmosphere in the rink, and I love how they treat their student athletes with amenities and helping them with their schedule and schoolwork as much as possible to set them on a path to success."

Originally from Wisconsin, he has traveled to Maine and Massachusetts, but likes Virginia a lot more.

"It reminded me of the Midwest," he said.

For now, he is looking forward to finishing his Junior hockey career by helping the Brown Bears overtake the first-place Fairbanks (Alaska) Ice Dogs in the season's final 25 games and contend for the NAHL championship.

"They actually just passed us this past weekend," said LaBarge, who was designated an alternate captain for the first time this season. "They're our rivals and they're always really fun games."

"We have a great team right now," he added. "We are off to a great start and playing really well. A lot of the guys here are really looking forward to winning the Robertson Cup."

In the offseason, he plans on hitting the weight room to prepare to join the Flames this fall, as well as hanging out with his friends in downtown Madison, Wis., and going fishing, and playing rounds of golf with them.

As a team leader, he has taken more responsibility in the locker room as well as on the ice this year.

"I like to keep it light and laugh with the guys, but when we hit the ice, it's all seriousness," LaBarge said. "I like to have fun when we do conditioning, but come game-time, I just want to win, so taking a hit to make the play, or contributing in any way that I can, I like to lead by example."