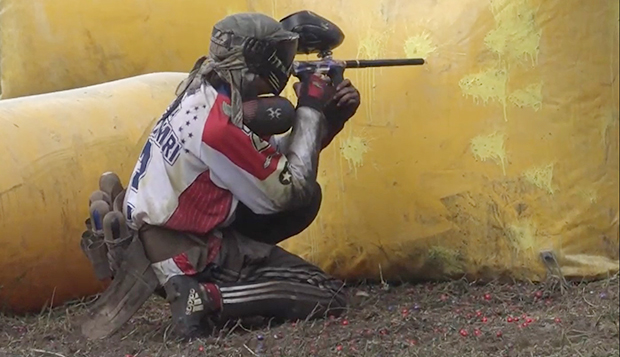 Flames senior Josh Montanari played a critical role on the snakeside for the Flames' gold line at the Paint Warz event.

Liberty University's paintball team competed with its top two lines at Paint Warz, the inaugural tournament hosted by the NRPL on Saturday at the Paintball Adventure Park in Severn, Md.

The Flames approached their final tournament of the fall semester as an exhibition, as they were the only collegiate squads in the field of 20 teams, which included a few players from the University of Maryland.

Liberty's Gold and Blue lines both competed in the same division in the D4/D5 Race to 2 event and showed tremendous progress from their first tournament, a D3-D5 tournament held Sept. 29 in Chesapeake City, Md.

"Overall, from our experience, I was very happy with the quality of play I saw and the potential that I see for nationals," Flames Head Coach Brian Davidson said, looking ahead to next spring's National Collegiate Paintball Association (NCPA) Championships in Florida. "Coming off a difficult first tournament where our Blue line only won one point and my Gold didn't even make it out of prelims, it was very encouraging. This tournament, my Blue line was looking better than my Gold line and both lines made it out of prelims."

Both lines went 2-2 in different brackets of preliminary play, moving on to compete in the Ocho finals. There, the Gold line lost to the eventual third-place team and the Blue line won its Ocho finals match, 2-0, before being eliminated in the quarterfinals by the eventual champions, OG Chokehold, to end up in eighth place.

"The Blue line played really well and I was very impressed with how much improvement I've seen since the beginning of the year," Davidson said. "All of their practice time is definitely showing. The team they played was definitely a more experienced and higher ranked team. Either way, it was a good experience for those guys to advance that far.

"There is a lot of work still to be done, but it's another step forward and more proof that what we're doing at home is working and just gives us more to work on in preparation for nationals," he added.

"He's really stepped up this year and I have been very impressed with his play," Davidson said. "He's one of our center players and he did a really good job of keeping the team composed during matches in this new tournament."

"He's a captain and he was on the snakeside, and the points they were winning, he played a big role in helping his team get those wins," Davidson said.