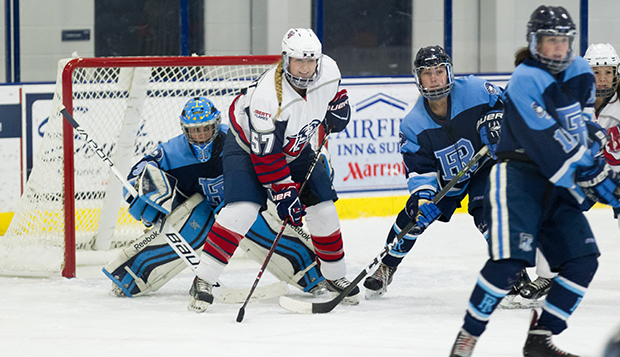 After being held to three first-period goals in the first three games on the road trip, the Lady Flames (8-1) unleashed their offensive firepower early in Sunday morning's fourth and final contest, scoring four times in the opening stanza.

"We had a really good first period," Liberty Head Coach Chris Lowes said. "We had a lot of energy and showed quite a bit of finish early on, which was nice to see. We haven't been able to find the finish offensively like we would like right from the start. But today, in the first 20 minutes, we just seemed to be buzzing."

Machholz capitalized off assists from Polson and senior forward Vanessa DeMerchant before senior forward Tiana Lisle put away a pass from sophomore forward Lexi Paulmert to expand Liberty's advantage to 4-0.

Junior forward Shelby Bradford stretched the Lady Flames' edge to 5-0 by converting on a power play off an assist from sophomore forward Aislyn Stretch before Rhode Island's Madison Balutowski finally got the Lady Rams on the scoreboard in the closing minutes of the second period with an unassisted goal.

With Liberty back on the power play, Polson, who started the scoring, also capped it off with the only goal of the third period, tipping in a shot by Manchak.

Lady Flames freshman goalie Kayla Savoie-Penton made 13 saves to improve to 5-0 with a 1.15 goals-against average and 92.6 save percentage.

Lowes said the weekend was excellent preparation for the postseason, when they will need to play as many as five games in five days to advance to the championship rounds of the Women's Midwest Collegiate Hockey (WMCH) tournament March 6-9 near St. Louis and the ACHA Division I National Championships set for March 25-30 near Dallas.

"It was a pretty solid showing to play four games in four days on the road, sleeping in hotels," he said. "We got a real good test, physically, against two good teams. Both UMass and Rhode Island are young teams, but talented teams and we had to be prepared. Overall, we are really happy to get out of here with four wins, which put us in good position going into the first ranking period. We are happy as a coaching staff with where we're at."

After starting the season by playing seven of their first nine games on the road, the Lady Flames will host 12 of their next 15 contests at the LaHaye Ice Center, starting with a series against Adrian (Mich.) College on Friday at 6:30 p.m. and Saturday at 1:30 p.m. The Bulldogs were ranked No. 1 for most of last season after losing to Liberty in the final of the 2018 ACHA DI National Championships in Columbus, Ohio.

"We always have really good battles with Adrian, which has kind of turned into a rival," Lowes said. "We know what to expect from them. They're a very physical, very talented team that is well-coached and will be up for the test. They haven't played as many games as we have, so hopefully we're more polished than they are. It will be good to get them early, and hopefully we can carry some of the momentum from this road trip into that series."

Liberty will conclude the first leg of its homestand with a three-game series against new WMCH conference opponent Midland (Neb.), from Nov. 1-3, which is 7-0 and has outscored opponents 45-2. The first ACHA DI national rankings of the season will be released after that weekend. 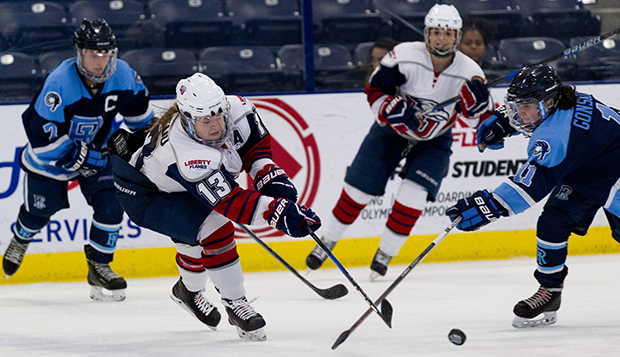