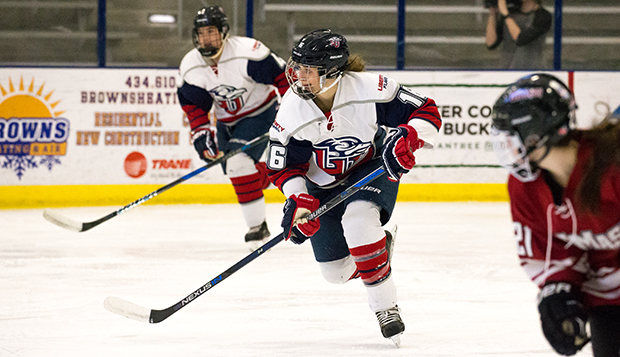 In the first outing of a four-game New England road trip, Liberty University's ACHA Division I women's hockey team defeated the University of Massachusetts for the third time in six days, 3-0 on Thursday night in the Mullins Center in Amherst, Mass.

After a scoreless first period, Liberty netted two goals in rapid succession in the second, with freshman forward Brook Pellizzari starting the scoring with her second goal of the season. She capitalized on a power play, finishing assists from senior forwards Alex Smibert and Vanessa DeMerchant just 1:40 into the period.

"It was nice to get that power play goal," Lady Flames Head Coach Chris Lowes said. "We had been struggling a little to get the looks, so it was good to get that first one, and to get us on the board."

Just over a minute later, freshman forward Val Manchak scored off an assist from senior forward Aly Morris to double Liberty's lead to 2-0. It was her sixth goal, tying her with fellow freshman forward Yannick Truter for the team lead.

Midway through the second period, the Minutewomen went on a five-on-three power play for a minute and a half and Rupoli stood tall to preserve the Lady Flames' shutout.

"Nadia played well, especially in those two minutes, which were some of the biggest moments of the game," Lowes said. "They had about eight to 10 shots and it would have really changed the complexion of the game if they had scored with 10 minutes left in the period."

Liberty senior forward Tiana Lisle capped the scoring one minute into the third period off assists from senior defensemen Dana McLeod and Deena Birney. Birney sent an outlet pass to McLeod, whose shot from the point bounced off the end boards and Lisle pounced on the rebound before lifting the puck into the upper netting.

"The goalie came across and she was able to lift it just over her glove into the top right corner of the net," Lowes said.  "That was a good finish by her. She went in and potted it. It was nice to get an insurance goal."

Overall, Lowes was pleased with his team's performance away from the friendly confines of home.

"It was a solid road win," he said. "We were happy with it. The game lacked a little bit of the pace that was there last weekend, but we were able to get it done. We played a pretty decent second period, with two goals in the first three minutes that put us in control."

After visiting the city of Boston including the harbor during the afternoon, the Lady Flames will return to UMass for Friday night's rematch at 7:50 p.m. before traveling to Rhode Island for games on Saturday and Sunday.