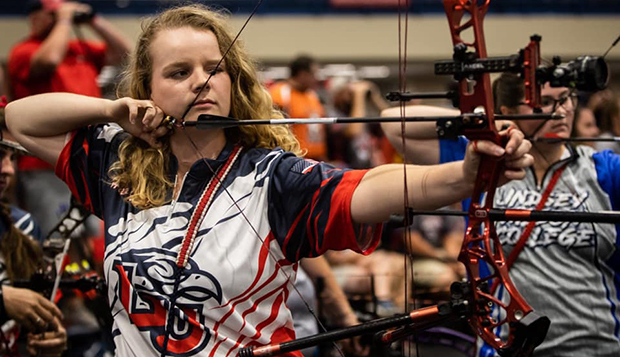 Sophomore Connor Rothermel earned a silver medal in the men's Olympic recurve division, and the women's compound team finished fourth, to lead Liberty University to an 11th-place combined team finish out of approximately 40 universities at the USA Archery 3D Outdoor National Championships in Foley, Ala.

The event was held in extremely hot and humid conditions at the Graham Creek Nature Preserve.

"The heat index was over 100 degrees so the individuals had to be extremely strong and I am extremely proud of them," Flames first-year Head Coach Ben Summers said. "Having a silver medalist, that's a huge deal. I heard comments from other teams on how kind and great our shooters are, so it was a very positive thing. We put Liberty archery on the map this week."

Suggs, Skelton, and senior Nicolle Dieterly, who fired consistent 10s in her first tournament, nearly upset eventual champion University of the Cumberlands (Ky.) in the semifinal round of Sunday's women's team compound event before finishing fourth.

"We went through three rounds of shooting and were tied all the way into the last arrow," Summers said. "We forced the No. 1 team to shoot for a 14, which is really difficult to hit, or we would have gone to the gold medal match. For our shooters to put the pressure on them was amazing."

"They did extremely well," Summers said.