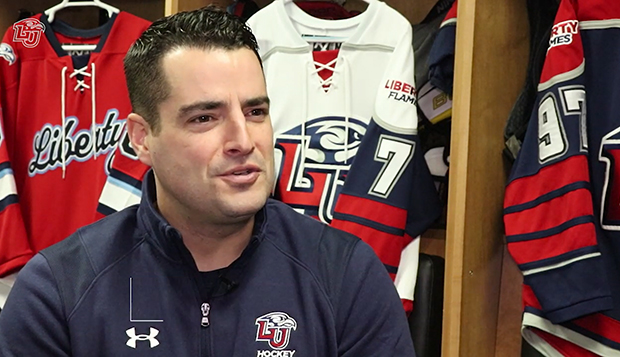 This weekend's series against the Washington Pride, set for Saturday at 5:30 p.m. and Sunday at 9:30 a.m. at the LaHaye Ice Center, will give Liberty University's two-time defending ACHA DI women's hockey team a good gauge of where it stands heading into its Sept. 27-28 ACHA-opening series at Lindenwood-Belleville. The opener against the Lynx will be a rematch of the Lady Flames' 5-2 national championship triumph on March 31 in Frisco, Texas, and the first two of seven away games to start the 2019-20 season.

Liberty is coming off a 7-0 exhibition-opening rout of the Huntington (Ontario) Hawks last Saturday at home.

"We anticipate Washington will provide an increased challenge for us, a good last test before we start our regular season," Lady Flames third-year Head Coach Chris Lowes said. "They're a talented team from top to bottom so they give us some looks we don't get from other teams and have some top-end talent that we enjoy playing against. We are excited about the matchup."

Liberty returns a solid corps of 17 returning players and welcomes six incoming freshmen on its roster that includes 13 forwards, eight defensemen, and two goalies. Preseason injuries have taken a toll, sidelining junior forward and captain Shannon Fehr until the spring semester, as well as freshman goalie Kayla Savoie-Penton and defenseman/forward Hannah Schotten for the next few weeks.

"As a coaching staff, we are very encouraged with what we have seen the first few weeks," Lowes said. "The new additions have done a great job of stepping in and battling right away and the returning players have done a good job of setting the tone. We have started out further along than we did last year. A couple weeks into the ACHA schedule, we should be firing on all cylinders."

The Lady Flames graduated their leading scorer, forward Lauren McDonald, and top defenseman C.J. Tipping, a three-year captain who was a part of all three of Liberty's national titles over the past five seasons.

"We lost a lot of offense and some speed with Lauren, but I think we have the ability to replace the scoring with a community effort and, with the new girls we brought in, we have the potential to be a faster team," Lowes said.

Freshmen centers Brooke Pellizzari and Yannick Truter and forward Valeriia Manchak from Ukraine will bolster the Lady Flames' attack, with Truter and Manchak both scoring goals against Hamilton.

"I think we are going to be dangerous offensively, not just in the open ice, but with the ability to possess the puck and spend a lot of time in the offensive zone," Lowes said.

"We have a full stable of defensemen able to cover the blue line and I'd be shocked if we don't have the best defensive corps in the country with players like (seniors Dana) McLeod and (Emily) John and (juniors Kristi) Serafin and (Sydney) Pierce," Lowes said. "Add in (freshmen Julia) McDonald and Schotten and we've got a lot of options there."

Senior goalie Nadia Rupoli, who started nearly every game in goal last season all the way through the national title defense, will be an anchor between the pipes again, at least until Savior-Penton is ready to make her debut.

"We're going to have one of the toughest schedules in the country, with the number of games we have against top-10 teams," Lowes said, noting that the Lady Flames will face Adrian four times, and Lindenwood-Belleville three times, and Miami (Ohio) University — which won three ACHA DI titles in four years from 2014-17 — twice.

Liberty will compete in the inaugural season of the Women's Midwest College Hockey (WMCH) conference that includes Minnesota, McKendree, Midland, Minot State, and Lindenwood-Belleville. The Lynx will host the WMCH tournament from March 6-8 in St. Louis.