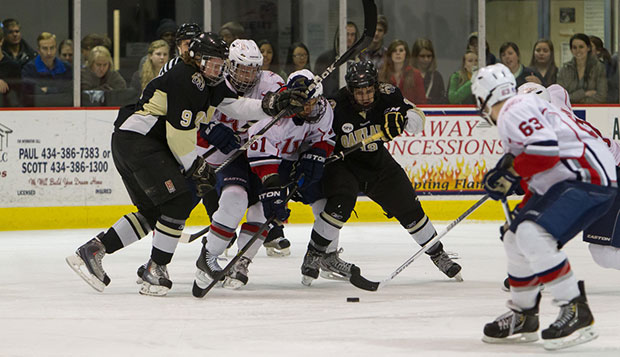 Two shorthanded goals on the same power play midway through the first period gave Oakland (Mich.) University all the momentum it needed to complete a two-game sweep of the Liberty University Division I men's hockey team, Saturday night at the LaHaye Ice Center.

For the second straight night, the Flames gave up three goals in the first period. Liberty was then mauled by the Grizzlies for six goals in the second before the Flames finally caught fire to score three of their own in the third. The 9-3 loss was their third in four tries against Oakland this season and third in a row after defeating Delaware last Friday night. Delaware beat the Flames in the rematch the following night.

Less than a minute after freshman forward Anthony Terzo was sent to the Grizzlies' penalty box in the first period, senior forward Brian Baker stole the puck behind the Flames' goal and sent a short pass to David Merkle. He fed it back to Baker in the right crease for an open-net score after Liberty goalie Clayton Brown was drawn out of position.

A minute later, Baker started a two-man breakaway down the left wing, leaving five Flames in his tracks before working another give-and-go with Merkle. Baker received a return pass in the left crease for an easy finish past the sprawling Brown for a 2-0 advantage.

Back at even strength, Liberty (21-13-2) unleashed a couple furious rounds of shots on Oakland's goal over the next five minutes, with a few by Ryley Egan and Brent Boschman hitting pipes or the crossbar, but none finding the net.

"That's the thing that's so frustrating, because I think we had four, at least four pipes, two or three side pipes, one crossbar, and if those go in, it's a different story," Flames assistant coach Jeff Boettger said.

The Grizzlies (20-15-2) countered by converting a third first-period goal with 2:35 left when Billy Balent punched in a perfectly placed cross-ice assist from Anthony Colizza in the right crease beyond Brown, who tripped over one of his own defensemen.

Oakland, which beat Liberty 7-6 in the 2006 DII national championship game before moving up to DI the following season and defeating five-time champion Penn State for the title, added four more goals in the first 10 minutes of the second period, showcasing textbook stickwork and crisp passing combinations.

Posting up in front of Brown, Drew Parus used his stick to chop at an oncoming shot taken by Ian Jacobs from up top, deflecting it deftly into the net for a commanding 4-0 advantage.

Three minutes later, with the Grizzlies back on a power play after Lindsay LeBlanc pulled an Oakland player down from behind, Frank Matyok and Balent threaded passes through the crease to Colizza, who tallied his first goal of the night. Less than 30 seconds after that, Zach Tuchklaper retreated to the defensive end and sent a backwards pass up ice to Patrick Smiatacz, who beat Brown to the upper netting on a breakaway.

Matyok added two more goals with the Grizzlies on a 5-on-3 power play and Adam Novack pocketed a slapshot into the top shelf from the left circle as Oakland opened a gaping 9-0 lead with 5:00 left in the second.

Boettger said the Flames have to learn not to get chippy when their chips are down, but to respond in a positive way as they did with the three third-period goals.

"That's the tough thing, the mental resilience, the mental battle, willingness to let it roll off your back a little bit," he said. "That's a key attribute that you have to cultivate, whether it's coaches, or players. That's something that goalies learn early because when they let one in, they're the last line of defense (so) they've got to learn to let it roll off their back and forget about it and stop the next puck. In the same sense, we have to know that when you hit posts and things like that, it's not the end of the day, the game's not over. You're generating chances, you're right there."

He understood why Liberty's players were upset, on the losing end of a lopsided score, and noted the physical play and provocations came from both sides.

"You have the offensive opportunities that aren't being converted and then it seems like every time they're getting a chance, they're putting the puck in the net," he said. "They're a great team, they battle hard. Their shooting was dialed in tonight. They're a tough physical team and they use their sticks well and their elbows and all that, but so do we. It goes both ways."

Liberty finally ended the shutout when Egan sneaked a wraparound shot from behind the right side of the cage between goalie Corey Hrischuk's leg and the post just 15 seconds into the third period.

Undaunted by the deficit, the Flames rallied for two more scores in quick succession with LeBlanc finishing them both. He cleaned up a shot by Scott Morogell that bounced in the goalie box, poking the puck past Hrischuk with 10:30 to play, before receiving a pretty pass from Boschman from behind the cage and putting it away with a powerful shot in the right crease with 9:41 to go.

"We're preparing and getting ready for what will be a tough road, no matter what," Boettger said. "To see the third period be played out like it is where we just had more patience and we were a little more focused around the net, it's a very positive thing. It was really a tough weekend, it was a step back in some ways, but God's preparing us for something big. Who knows, maybe a miracle."

"Definitely," freshman forward Bram Erickson said of the Flames regrouping for the playoffs. "We've just got to come together a little more, work as a team."

After hosting a live webcast of the 16th and final ACHA DI poll of the season, which will determine seedings for the March 1-6 national tournament in Chicago, Liberty will conclude its regular season next Friday and Saturday at LaHaye with a rematch against West Virginia, a team it swept last month in Charleston, W.Va.