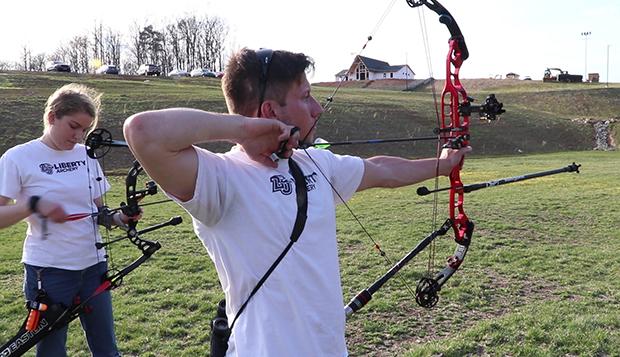 "This will be our team's first time competing in field archery nationals," Rigney said. "Based on their practice scores at our field range (at the Liberty Mountain Gun Club), they're right there in the mix with some of the best in the nation, so we are hoping to bring home some hardware."

Medals will be given to the top three finishers in each category at Sunday's 6 p.m. awards ceremony.

Rising graduate Louis Boyd and rising sophomore Hala Skelton will be competing in men's and women's compound, respectively, and as a mixed compound tandem.

Rising sophomore Connor Rothermel will compete in men's Olympic recurve while rising juniors Isaac Underhill and Hannah Suber will compete in men's and women's barebow, respectively, and in the mixed barebow team category. Kaylee Martin, who graduated on Saturday, will enter the women's bowhunter competition.

"Most of these guys, particularly Hala and Connor have competed before on their own," Rigney said. "They are more than ready for the first competition, but they don't know what to expect."

Archers will have four minutes to per round to shoot 12 rounds of six arrows in Friday's and Saturday's qualifying for Sunday's elimination rounds. Mixed team qualifying is set for Saturday night.

"It's like indoor nationals in that it's all known yardage," Rigney said. "The only think that makes it like 3D nationals is that it's outside, so wind could be a factor."