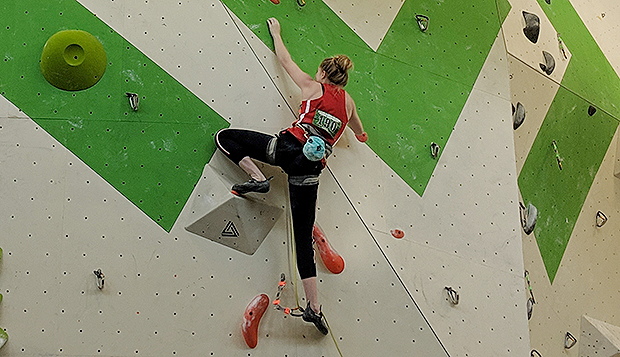 Liberty University junior Tori Perkins had the 18th highest qualifying score on Friday to advance to Saturday's 22-competitor finals before climbing her way to a ninth-place women's sport division showing at the USA Climbing Collegiate National Championships in Murfreesboro, Tenn.

Perkins became the third-year program's first collegiate national qualifier and finished second at the competition in Texas last spring to qualify for the International Federation of Sport Climbing (IFSC) World University Championships in Slovokia, where she placed sixth last June.

This year, she missed most of the spring season recovering from an injury and barely returned in time to qualify for nationals, along with three senior teammates.

"She wasn't quite in condition or as prepared as she was last year, but she did a very good job and we are proud of her," Liberty Head Coach Elliot Gaunt said. "It was a tough field of women and she climbed in a venue where it was tough to get the number of routes in that she needed in qualifying.  The finals route was quite difficult and none of the women topped it, but she climbed high enough to take ninth."

She was joined by teammates Connor Ellis and Ruth Jang, who placed 101st and 62nd in their qualifying rounds in the men's and women's sport divisions, respectively, and Keegan Nichols, who competed in men's bouldering.

Perkins, who is planning to go on a World Race trip to Thailand this summer, is excited to return for her senior season at Liberty and to challenge for another top-three collegiate national finish, which would qualify her for a second world championships at the bi-annual event.

"They went down there with a general understanding of what they had to do and they learned a lot," he said, noting that he also gained a better perspective on how to set up the team to be more successful in the future. "Climbing as a whole at Liberty and in the community is growing very quickly, and we hope to have a higher quality pool of climbers to draw from. But we want to go from having a depth in numbers to a depth in strength, to select a group that is dedicated to the program and will work hard to compete."