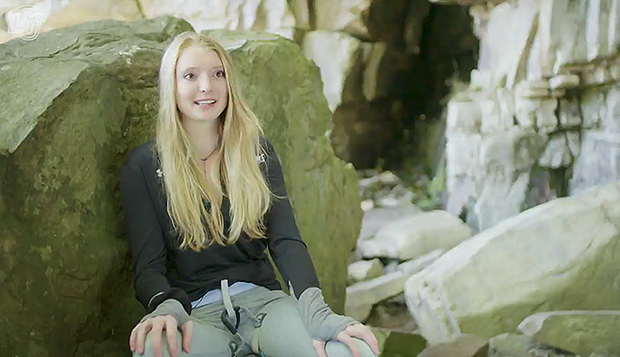 Lady Flames junior rock climber Tori Perkins was featured in a Game On video produced by LFSN and aired in March.

Close to 500 men's and women's sport, bouldering, and speed climbing competitors from colleges and universities around the United States are registered for the event, to be held at Climb Murfreesboro, an indoor facility.

Perkins, who was recently featured climbing outdoors on a Game On segment produced by the Liberty Flames Sports Network (LFSN), has Liberty's best shot at placing, though she has spent the past four months rehabilitating from a skateboarding injury sustained over Christmas break in Georgia.

"Tori has the most experience and is the most talented and she is about as good as we can get her at this point," Liberty Head Coach Elliot Gaunt said. "She is excited. We put together a training program for her and she has been diligently following that. Hopefully it will pay off come competition time."

All four Liberty climbers will compete in Wave 2 of qualifying on Friday, from around noon-3:30 p.m. Based on their performances, they could qualify for Saturday's finals, starting at 10 a.m.

The complete list of competitors, grouped by schools, is available online.