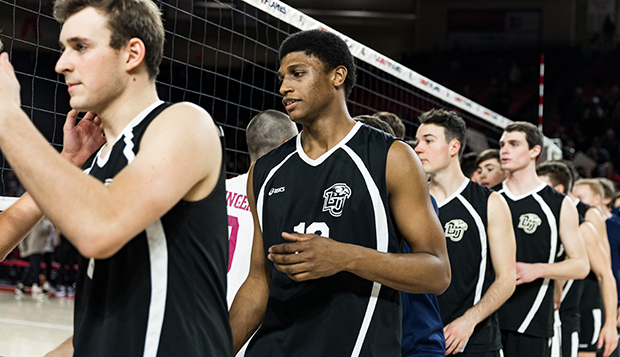 "Today was the first time we have ever won our pool on the first day at nationals, but losing the first game against UC Davis was a good wakeup call," Liberty Head Coach Bryan Rigg said. "We needed to be a little less complacent and more active."

He said the team is still getting used to the change of altitude (Denver is over 1,500 feet above sea level) and two-hour time-zone difference after flying to Colorado on Wednesday.

"Today wasn't our best volleyball," Rigg said. "We struggled with lots of things, including the adjustment to elevation. Everybody has had their ups and downs. We missed about six serves per set, which is not unheard of because we are aggressive servers. (Sophomore) Sean Taggart got us back in the match against UC Davis with his serving."

The Flames will await the winners of Friday morning's Gold Bracket challenge matches pitting Air Force against Miami (Ohio) and UCLA against Arizona. Those two teams will join Liberty in a round-robin power pool, with the top two advancing to Saturday's Gold Bracket, reserved for the top 16 teams in the 48-team Division I-A tournament. The next 16 teams will compete in the Silver Bracket, and the last 16 will be placed in the Bronze Bracket.

Saturday's championship semifinals and finals will be webcast live by the NCVF.

Liberty's Division II team, meanwhile, is ranked No. 5 in the nation and could be a favorite in its 48-team bracket.

"The B team is firing on all cylinders," Liberty Assistant Coach Josiah Williams said.

The Flames won their first match against Illinois State, 25-15, 25-17, and were scheduled to face Air Force and Illinois in their last two rounds of pool play on Thursday night.