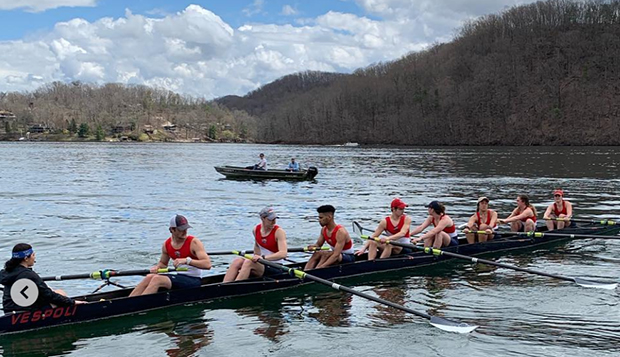 The three boats Liberty University's crew teams entered in Saturday's Waterfield Cup hosted by Virginia Tech at Claytor Lake State Park in Dublin, Va., posted first-, second-, and third-place finishes to lead the team to a third-place showing out of eight state schools in the regatta.

The women's Novice 4 team of Joanna Moran in the stroke seat, Tori Drumheller in the 3 seat, Meredith Thompson in the 2 seat, and Lindsey Bicknell in the bow seat of a boat coxed by Nic Londono finished the 2,000-meter race in 8 minutes, 6.4 seconds, capturing the gold medal in front of runner-up VCU (8:24.6) and third-place Virginia Tech (8:48.2).

"That was excellent and a pretty fast time for this point in the year," Liberty Head Coach Debbie Prowse said. "Lindsey was originally coxing for the men, but she has been rowing all winter long and we made a switch and put her in the bow seat and the boat gained better speed and balance. It seemed to make a big difference and we are going to race that same lineup at the (April 19-20) SIRA Championships in Oak Ridge, Tenn."

The Flames and Lady Flames joined forces to form a mixed 8 boat, also coxed by Diaz, that placed third, as Liberty did as a team, behind first-place Virginia Tech and runner-up VCU. Other schools in the competition were ODU, Christopher Newport, and JMU.

Liberty had planned to open its spring season at the Occoquan Sprints last Sunday, but those races were canceled due to 30-knot winds.

This Saturday, Liberty will celebrate the 10-year anniversary of its rowing program with an alumni event at the team's boathouse at Mitchell's Point Marina on Smith Mountain Lake, where two new boats will be dedicated and returning and current team members will participate in friendly 500-meter rows.