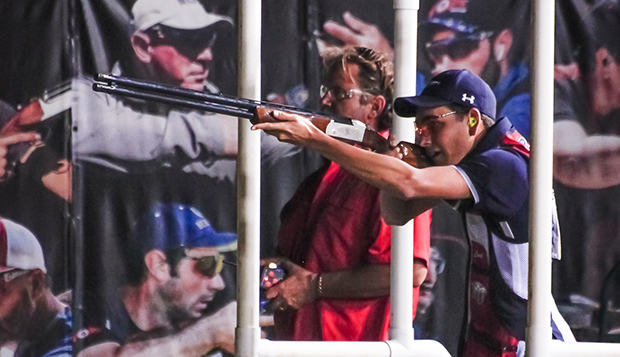 Raised in Riverside, Calif., Liberty University freshman Carl Pongs didn't start shooting shotguns until his sophomore year in high school, when he followed his sister on a mission trip to Alaska.

"She was going to help build a church and because of the threat of bears out there, it's policy that everyone has to learn how to use a gun," Pongs said. "I went with her because it sounded cool."

He found that he was naturally gifted with a shotgun and soon joined a youth team sponsored by Italian manufacturer Beretta, traveling to competitions in Alabama, Arizona, California, Nevada, and Oregon.

This year, Pongs has added Virginia, Maryland, and Texas to that list, capping a fantastic freshman season on Liberty's shooting sports team by winning a national title in Sporting Clays and leading the Flames' 12 travel team shooters in four events at the March 25-30 ACUI Collegiate Shotgun National Championships in San Antonio.

"It was a great experience and the kids did a phenomenal job," Liberty shooting sports Head Coach Dave Hartman said.

Pongs shot a round of 89 out of a possible 100 to finish first out of 236 Class A contestants in Sporting Clays, his specialty, leading Liberty to a fifth-place team showing out of 13 schools in Division 2.

He also came in fourth out of 230 shooters in the Super Sporting Clays Class A competition with a round of 93 and fifth out of 207 competitors in International Skeet Class A with an 88.

Pongs' highest score of 96 was in American Trap, which placed him a team-best 23rd out of 242 Class A shooters.

"Sporting Clays events are often a lot lower scoring than a skeet or trap event," Pongs said. "Skeet and trap target shooting has a lot more to do with muscle memory whereas in Sporting Clays, there is a lot more dexterity and brainwork involved because the targets are different every time."

Pongs practices regularly with his teammates on the shotgun shooting range and 12-station Sporting Clays fields at the Liberty Mountain Gun Club located three miles from campus. He is on the 2019 National Sporting Clays Association (NSCA) Briley All-American Junior Second Team for 20 gauge and 28 gauge Sporting Clays and has competed for cash prizes on multiple occasions as a Master Class shooter.

In late October, he traveled to San Antonio to compete in the Open class of the Professional Sporting Clays Association (PSCA) national championships.

Pongs, who is pursuing a business administration degree with a cognate in professional selling, will spend this summer as he has those in years past, working for his father's business, Green Meadow Growers. It uses ground-cover grasses, plants, and trees to landscape college campuses and housing developments in California, Arizona, and Nevada, where temperatures can exceed 115 degrees in the summertime.

He hopes to work for his father after graduating from Liberty and to take over the business or start his own in the future.

For now, he is enjoying collegiate shooting sports and is determined to qualify for the Open division, a step up from Class A, at next year's ACUI National Championships by shooting scores of 95 or higher at the East Coast Conference Championships.

"I'm grateful for the opportunity to compete for Liberty," Pongs said, noting the team expects to stay at Division 2 and qualify to send as many as 15-20 shooters to nationals next year. "Division 2 has really big schools like Purdue and Auburn and really well-fed programs, so we were up against a lot."

"You always shoot for the biggest prize," Hartman added. "We are enjoying great successes and are getting done early what we had only dreamed about as a first-year program a year ago."