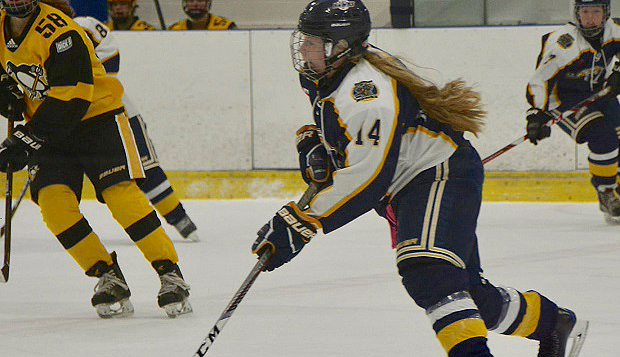 Julia McDonald has served as an assistant captain for the Hamilton Hawks over the past two seasons. (Submitted photo)

As a standout defenseman for the Hamilton Hawks the past two years, Julia McDonald has had multiple chances to make a positive impression on Liberty University's ACHA Division I women's hockey coaches in season-opening exhibition games against the Lady Flames at the LaHaye Ice Center.

The Stoney Creek, Ontario, resident made her official visit back to Liberty in December and earlier this month committed to play for the Lady Flames starting this fall.

"When we had her back down for an official visit, she affirmed what we thought of her as a hockey player," Liberty Head Coach Chris Lowes said. "We got to spend more hours with her than our average recruit and were really impressed with her off the ice. She's a really good kid and we're happy to be bringing her on board next year."

McDonald (no relation to senior forward Lauren McDonald) has scored 10 goals and distributed 16 assists in 61 games with the Hawks over her career, ranking first among Hamilton's defensemen in scoring.

"Julia checks the boxes for us, as far as what we're looking for as a defenseman," Lowes said. "She is an assistant captain, so she is well-respected by her coaches and fellow players, and she brings a good demeanor. She's got great size and strength and will be a great two-way defenseman for us."

Liberty left an extremely positive impression on McDonald, who plans to study sport management, which combines her love of sports and family background in business.

"I chose Liberty because it has a really good reputation academically, fantastic facilities, and the hockey team has a strong history," McDonald said. "When I came on the campus it felt different from a lot of other schools, everyone was very welcoming and it felt very special. The players on the team I met and the coaching staff were very encouraging and kind."

She was teammates with current Lady Flames freshman forward Alexis Paulmert on the Hawks last year.

"Hamilton has been a great feeder program that has produced talent for us over the past 10 years," Lowes said.

Liberty — which is ranked No. 1 and will begin defense of its ACHA Division I national championship with a best-of-three-game series against No. 8 Midland (Neb.) on March 27-29 in Frisco, Texas — must replace defensemen C.J. Tipping and Katie Comeau, who will graduate this spring.

"There will be a lot of minutes to be filled and a great opportunity right away for Julia to come in and make her mark," Lowes said. "That's the big thing we were looking at —  someone like her that can come in right away and play against those top-end teams to help solidify a pretty good defensive corps."

McDonald is looking forward to the challenge of helping the Lady Flames continue their tradition of success on a national level.

"I am really excited about starting a new chapter of my hockey career and life at Liberty — to join a national championship-winning hockey program, to learn all the new systems, and be able to travel and play the sport I am passionate about," she said.