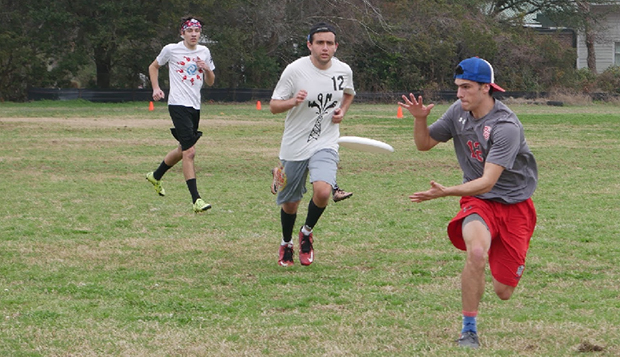 "It was an interesting mix of teams that went to the (USA Ultimate Collegiate) National Championships last year, like William & Mary and George Washington, and a lot of other teams ranked in the top 100, including VCU, Drexel, and Richmond, a Division III team," Flames Head Coach Brendan Phillips said.

Liberty then lost a crossover match against top-seeded William & Mary, 13-7, before falling to Mary Washington, the reigning Division III national champion, 15-9, in the first round of the consolation playoffs.

Vermont, ranked 58th and seeded third, was the overall team champion, upsetting the 16th-ranked Tribe, 15-14 in the final.

Before the start of the semester, Liberty picked up three players, including senior cutter Austin Heston and sophomore handler Ben Reutener, who both returned to the team after sitting out the fall season. The Flames also added junior transfer Sam Swinson.

Liberty will next compete in two tournaments in Virginia Beach — the Feb. 23-24 Oak Creek Challenge and March 30-31 Atlantic Coast Open — before hosting the April 13-14 Virginia Conference Championships at the Liberty Mountain Intramural Complex.