Men's lacrosse debuts at record-high No. 6 in preseason poll 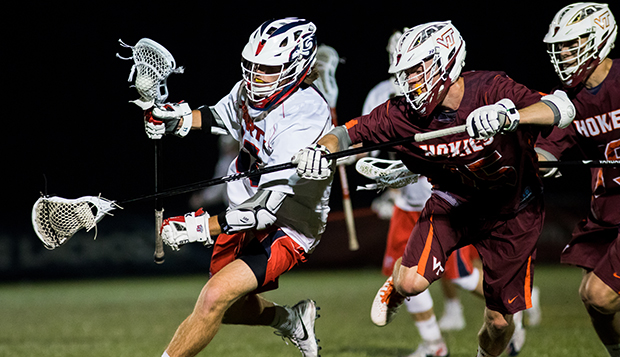 Two weeks before its 2019 season-opener at home against Central Florida, set for Feb. 16, Liberty University's men's lacrosse team received its highest preseason ranking, debuting at No. 6 in the MCLA Division I Preseason Coaches Poll released on Wednesday.

"This is the most optimistic we have been going into any season and we're looking forward to it," Flames Head Coach Kyle McQuillan said. "We have all the tools needed to have success in our conference and at-large as well. We are a team on the rise and we feel really good about our chances."

That is the same position the Flames were tabbed at in the Inside Lacrosse Preseason Top 25 and one spot up from the final MCLA DI ranking of 2018, posted after Liberty made its first-ever appearance in the May 7-10 MCLA DI National Championships in Salt Lake City, Utah.

Liberty debuts one spot below SELC Northwest Region rival and defending SELC Tournament champion Virginia Tech at No. 5 and two behind reigning SELC Northeast Region champion South Carolina at No. 4.

In all, seven of the MCLA's Top-25 teams are members of the SELC, with four in the top 10, including No. 10 Georgia Tech. The SELC, the largest conference in the MCLA with 21 teams, has steadily risen up the ranks in prominence.

"Right around the time we moved from Division II to DI (in 2014), there was a dramatic increase of success among teams in the SELC as a conference as a whole," McQuillan said. "We now boast a lot of teams that can not only make the MCLA national tournament, but win it."

The Flames revised their 2019 schedule slightly between semesters, but it will still be one of the most challenging in program history. Originally, Liberty was planning to host Colorado State on March 18 before facing No. 9 Grand Canyon in the first round of the Battle for Baltimore.

Instead, the Flames dropped the Colorado State match and will face Oregon in the Battle for Baltimore opener on March 23 before challenging Northeastern in the second round on March 24.

"Those are two teams we've never played before, so it will be neat to be able to play different teams that will give us different looks," McQuillan said.

Prior to that tournament, Liberty will play three games over its spring break — at West Virginia on March 9, Davenport on March 11, and defending MCLA DI national champion Michigan State, ranked second in the nation, on March 13. The Flames were the only team to defeat the Spartans (14-1) last season in the second round of the Battle for Baltimore.