Lady Flames come from behind three times to tie RedHawks 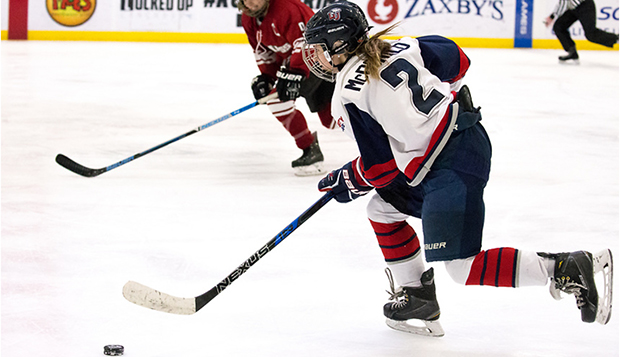 Liberty University's ACHA Division I women's hockey team rallied from two goals down once and one goal down twice to forge a 4-4 tie in Friday night's opener at Miami (Ohio) University's Goggin Ice Center.

"It was a good game, good hockey, and we added another chapter to our rivalry," said second-year Lady Flames Head Coach Chris Lowes, who was coaching against the RedHawks for the first time. "They looked like a veteran team. They weathered all of our storms and made the most of their chances."

Miami netted the first two goals with 10:20 and 5:28 to play in the first period before Alex Smibert cut the deficit in half off assists from senior forward Lauren McDonald and fellow junior forward Aly Morris at the 3:13 mark. Sophomore forward Shelby Bradford knotted the game at 2-2 a little over three minutes into the second period, finishing an assist from Smibert, before the RedHawks responded less than two and a half minutes later to reclaim a 3-2 lead.

Finally, at the 5:04 mark, McDonald delivered the equalizer off assists from graduate defenseman C.J. Tipping and Morris, leaving the teams deadlocked at 4-4.

"All the coaches liked the demeanor of the teams," Lowes said. "Even late in the game, with just over five minutes to play, everyone was calm and confident. I was really encouraged. Our lines were buzzing, we ran a pretty deep bench, and all in all we were pretty happy."

Liberty outshot Miami, 36-20, and junior goalie Nadia Rupoli made 17 saves. She didn't have to stop a single puck in the five-minute, three-on-three overtime period, even with the RedHawks on a power play for the final 1:44.

"There were a lot of positives," Lowes said. "We did come back from deficits three times. Our power play went two-for two and our PK killed all three penalties. We felt good playing five-on-five, on the power play, and on the PK. We just made a couple mistakes and missed a couple assignments and they made us pay."

He said the Lady Flames are eager for Saturday's rematch set for 5:45 p.m. back at Goggin.

"When you trail the whole game and come back in the end, it leaves you with a bit of optimism for tomorrow," Lowes said. "I think the girls will be primed and I anticipate us having a great showing and feeding off the energy we had tonight. It's going to be a fun semester with a lot of challenging games on our schedule."