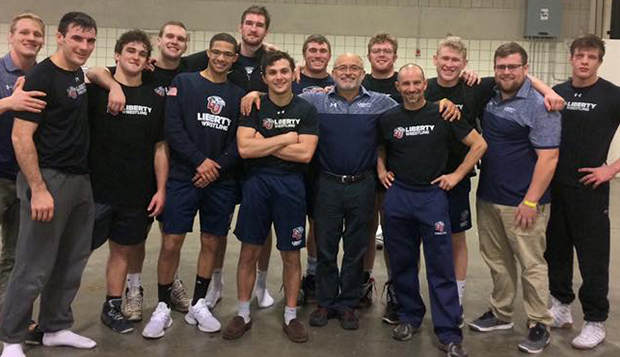 Of the 13 colleges and universities in the tournament field, Liberty was the only non-NCAA competitor.

Amos won his first match over Oneonta State's Jake Pine by a 16-0 technical fall before scoring a 9-3 decision over Trinity's Mason Sangillo and winning his last two bouts by major decision — 10-0 over UNC Pembroke's Marcus Montgomery in the semifinals and 14-2 over Oneonta State's Peter Pjetri in the championship final.

Burgette won his first three matches — by fall in 1 minute, 13 seconds over Ferrum's Malik Barr, 16-0 technical fall over Trinity's Lukas Kaminski, and 11-2 major decision over NYU's Cole Karam before being pinned by RIT's eventual champion Kaidon Winters in 4:43 in the semifinal round. He then won a 15-5 major decision over Muhlenberg's Angelo Mahaffey before losing a 13-9 decision to UNC Pembroke's Tyler Makosy in the consolation final.

McIlhenny went 1-1 in the championship bracket, scoring a 4-2 decision over Trinity's Anders Klass before dropping a 9-6 decision to UNC Pembroke's eventual champion Brandon Sloop. He then won his first three consolation matches — by fall in 3:47 over St. John's Dan Gehrz, 15-0 technical fall over Klass, and 18-8 major decision over NYU's Benard Fox — before losing by 14-6 major decision to Cornell's Bryce Overson in the third-place bout.

Also at 184, Richmond recorded three pins in the consolation bracket — over Cornell's Zachary Finn in 2:26 and Devin Roettger in 1:22 and NYU's Fox 1:04 into the fifth-place final. Allen pinned Flames graduate David Smith in 2:35 in his first consolation match before scoring a 21-5 technical fall over NYU's Jacob Lill. He lost by 16-1 technical fall to eventual third-place champion Chris Lyons from Cornell before winning his fifth-place bout, 5-2 over Ursinus's William McGinley.

Liberty will return to the mats for the 39th-annual Virginia Duals to be held Jan. 11-12 at the Hampton Coliseum, where it will look to improve on last year's runner-up finish in the American Division.