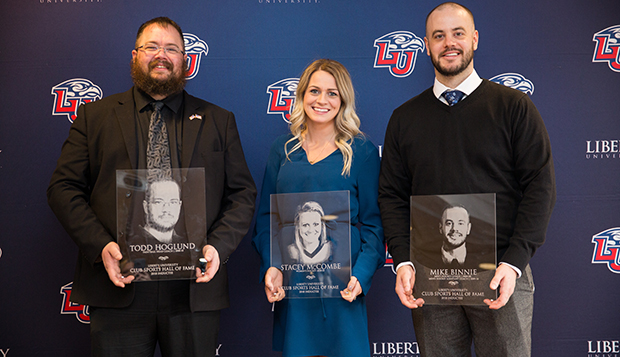 Persistence, passion, and pursuit of a higher calling are characteristics of all three members of the fifth class of Liberty University's Club Sports Hall of Fame, which was inducted Saturday afternoon at the Hancock Welcome Center.

McCombe was presented by her husband, Andrew ('14), a former forward for the Flames DI team and fellow native of London, Ontario. She served as an assistant captain as a junior, when she was named team MVP and the Club Sports Female Athlete of the Year, and head captain as a senior.

Andrew McCombe said Stacey's character was refined through her time at Liberty, when she helped lead the Lady Flames to their first ACHA National Championship game as a senior in 2013, and she continues to model those qualities five years later, as the mother of three children ages 3 and younger.

"Stacey is a person that demonstrates an exceptional level of character in everything that she does," Andrew said. "She's incredibly driven, incredibly hard working, she's passionate, she's organized … she's detailed, she's very caring, and operates with a high level of integrity, whether it's on the ice, as a mom, or helping others. The most beautiful part of it all is that she does all of this in a very humble way."

Stacey McCombe thanked her parents and coaches, Paul Bloomfield and Justin Forth, who were all in attendance.

"Just looking back on this Liberty campus, it brings me back to a life that really kind of feels like it was a dream," she said. "This award is not mine alone. It represents the efforts of sacrificial parents, dedicated coaches, hard-working and talented teammates. It's a privilege to say that I played for an organization that strived for such excellence and it means that much more coming from a place that loves Christ at the center of all things."

McCombe also paid tribute to her former linemate, Sarah Stevenson, who died at age 24 last year following a sudden illness, after assisting the majority of her goals over her last two years on the team.

"Sweat equity is the most valuable equity there is, knowing your business better than anybody else and loving what you do … and Mike is a true testament of that," Hoefler said. "As forwards, we could go out there and perform and know that our goalie had our back."

He platooned in net with Dalton Stoltz, who he later succeeded as the Flames DI men's goalies coach. The two players developed a close friendship on and off the ice.

"As a goalie, I always felt if I wasn't playing, the first thing to do was to support the guys that were," Binnie said. "I was friends with each guy in the room and was able to build them up and encourage them, by saying the right thing or with a tap on the back of the head."

Hoglund, who guided the Flames to three top-four National Collegiate Paintball Association finishes in six seasons at the helm, was in Florida this past April when Liberty won its first national championship.

He was introduced by former player Aaron Thompson, now an assistant to Brian Davidson, another of Hoglund's protégés and his coaching successor.

"They never achieved a national title as players, and I wish they had, but I'm really thankful that God gave them that opportunity (as coaches)," Hoglund said. "Everybody knew that we were different and I always knew that we had to be better because we were Christians and that's what I tried to instill in our players and coaches. That's what I would encourage anyone involved in Liberty Club Sports is to truly be a Champion for Christ and use that platform to speak truth into peoples' lives."