Fricks' backhander in OT lifts Flames over Orange in opener 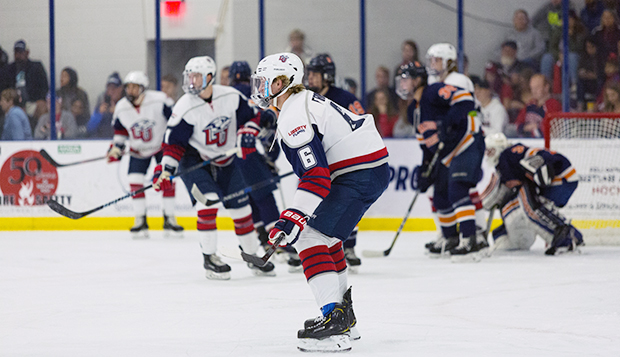 Junior defenseman Jacob Fricks skates through the slot in the Flames' first meeting with Syracuse on Oct. 12. (Photo by Gabrielle Calhoun)

In the teams' first-meeting at the Tennity Ice Pavilion at the Division I level, Liberty outshot the Orange by a 37-24 count and held a 36-24 advantage in faceoffs, which helped it prevail in another back-and-forth clash between the top two teams in the ESCHL.

Syracuse (8-5, 6-2-1 ESCHL, ranked 16th) struck first on the power play when Stephen Bressi took a pass from Trip Franzese and one-timed a shot from the right circle past Liberty senior goalie Cole Burack just four minutes after the opening faceoff.

The Orange extended their lead to 2-0 with 11:50 left in the first when Franzese tipped Ford Hatchett's shot from the outside edge over the shoulder of Burack.

"We didn't play well in the first period at all," Flames Head Coach Kirk Handy said. "They really came out and took it to us."

Liberty outscored Syracuse 3-0 in the second period to seize its first lead.

Junior forward and leading scorer Quinn Ryan cut the deficit to 2-1 at the 10:40 mark by deflecting junior defenseman Basil Reynolds' shot from the point past Syracuse goalie Michael Cuozzo. Just over two minutes later, Flames sophomore forward Devin Pierce won a faceoff to junior defenseman Josh Bergen in the high slot where he rifled the equalizer into the top-left corner of the cage with 8:17 left.

Then, in the final 30 seconds of the period, the Flames capitalized on a three-on-one fast break sparked by junior forward Brock Thompson, who sent an outlet pass from the blue line to sophomore forward Cole Gammer. He skated the puck from the red line up the right wing before crossing it back to Thompson in front. Cuozzo blocked his point-blank shot right to Ryan, who stuck it inside the right post.

Starting the third period on the power play, the Orange retied the contest when Connor McNamara tipped in defenseman Patrick Corcoran's low shot from the point. Syracuse leading scorer Peter Owen Hayward then put the Orange back on top by lifting a wrist shot from the right crease with 15:29 remaining in regulation.

Liberty went 0-for-1 with a man advantage while allowing Syracuse to convert two of its five power-play chances.

Thompson leveled the score at 4-4 with 7:26 to go by chipping in a putback of Ryan's slapshot from the high slot, forcing an extra period with the teams tied for the third time.

Early in the five-minute, sudden-death overtime, Hayward mishandled the puck on a one-on-one opportunity with Burack before Cuozzo denied Ryan's bid for a hat trick with a spectacular save on the other end. Seconds later, Fricks received a pass from Gammer in the left corner and skated behind the cage before coming to a skid stop and reversing the puck into the left crease, where he nonchalantly lifted a sharp-angled shot top shelf over Cuozzo for the game-winner with 3:34 to play.

"We ended up winning the game and that's encouraging, but we need to play a whole lot better (in Saturday's rematch)," Handy said. "It's a big game for us. We'll regroup. We have to make sure that we're ready to play right from the get-go, all 60 minutes."

Saturday's final regular-season showdown between the Flames and Orange will be webcast live on Syracuse's YouTube channel, starting at 2 p.m.