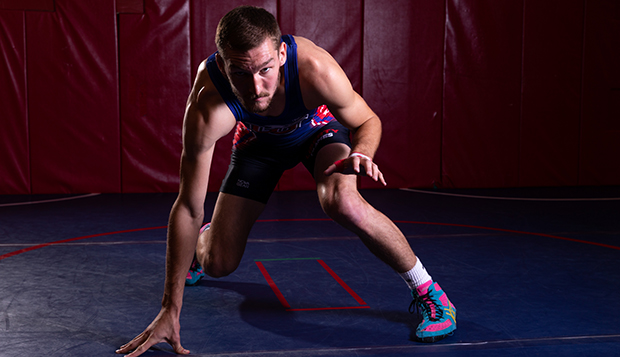 Facing an array of NCAA Division I, II, and III opponents, Liberty University's men's wrestling team had a third-place finisher and two consolation finalists out of its 11 entries Saturday at the Lindenwood Open in St. Charles, Mo., where the Flames competed for the fifth consecutive year.

"This was probably the toughest tournament we have wrestled in to date this year and as a team, we wrestled pretty well overall," Liberty Head Coach Jesse Castro said. "This helps the guys compete at a higher level and teaches them how to win those close matches. They were battling in a lot of them and that's going to serve us well as we go on through the season."

"If you can place at this tournament, that's a pretty good feat," Castro said. "Iowa State has a very strong Division I team, so it was huge for him to pick up two wins against them. He definitely got off to a good start and had to work his tail off for a couple of close matches in the consolation bracket."

At 184 pounds, after being pinned by Oklahoma's eventual champion Anthony Montalvo 1:03 into his first match, Flames senior captain Josh McIlhenny won all four of his final matches to clinch the consolation bracket (equivalent to seventh place).

He scored a 13-4 major decision over McKendree's Tristen Cook before edging Ellsworth's Jordan Shahrikian, 5-4, and pinning Iowa Central's Reymundo Vasquez in 1:25 to reach the final, where he won by medical forfeit.

Liberty sophomore David Cox won his first bouts by 8-3 decision over Maryville's Conner Villarmia before dropping a 10-9 decision to Missouri Valley's William Seibert. He bounced back to score a 13-3 major decision over Maryville's Dylan Shotwell and a 17-1 technical fall over Tristan Meador before advancing to the consolation final with a 9-6 decision over Iowa State's Zane Mulder. Northeast Oklahoma's Kyle Caldwell dealt Cox a 3-1 setback in the seventh-place match.

Flames sophomore 157-pounder Chad Cantrell finished 3-2 for the tournament after losing his opening match to Missouri's Derek McDaniel, 5-1. He scored a 12-4 major decision over Benedictine's Elijah Jimenez, a 9-2 decision over Lindenwood's Dawson Sickmeier, and a 6-1 decision over Marysville's Tanner Sparks before forfeiting his consolation semifinal.

Both of Liberty's heavyweights, sophomore Jeffrey Allen and senior captain Dominick Johnson, lost their opening matches before advancing through the wrestlebacks — Allen with three straight decisions to reach the consolation semifinals and Johnson with a decision and a forfeit to get to the quarterfinals.

The other half of the Flames' split squad will be in action against primarily NCAA Division III schools on Sunday at the Star City Open, hosted by Ferrum University at the Salem Civic Center. Liberty's entire team will compete next in its first tri-meet, Dec. 8 at NCAA DIII Southern Virginia, where the Flames will also face West Virginia Tech, an NAIA opponent.