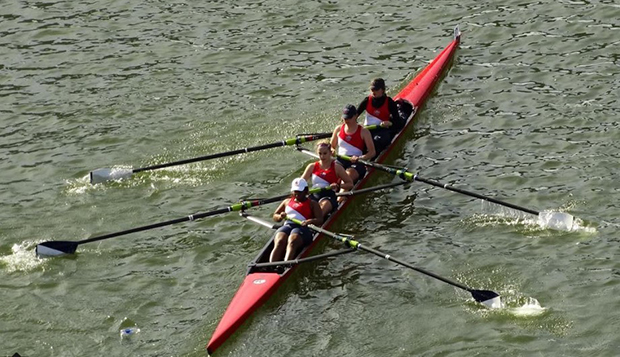 Liberty University's men's and women's crew teams gained momentum through four fall semester regattas, capped by some strong finishes at Saturday's Head of the South on the Savannah River in Augusta, Ga.

The Flames' men's double tandem of seniors Brad Weisman and Ryan Krupansky finished fifth out of eight boats in 18 minutes, 10.5 seconds on the 5,000-meter course.

"Our men's double rowed an awesome race and have had a very good fall season," Liberty Head Coach Debbie Prowse said. "They have been working together really well and their placements have been respectable against some really tough competition. They've held their own."

"They met their goal to finish in the top half and they were really excited about that," Prowse said.

"The women's novice 4 did remarkably well," Prowse said. "They have been working very hard in the erg room and on the water in practices and they have been progressing very nicely."

Moran did such a good job stroking the novice boat that Prowse put her in the same role in the women's varsity lineup, which finished ninth out of 16 entries in 21:06.9.

"The two novice women rowers in the varsity 4 picked up the technique quickly," Prowse said. "They rowed well together and it was a great experience."

"The women's varsity four rowed a very strong race," Prowse said, noting that times were markedly faster because the river was flowing fast that day and the course followed the current.

Those interested in trying out to join the team for the spring semester may contact Prowse at dprowse91@gmail.com.