No. 1 Adrian rallies from two goals down, tops No. 5 Flames 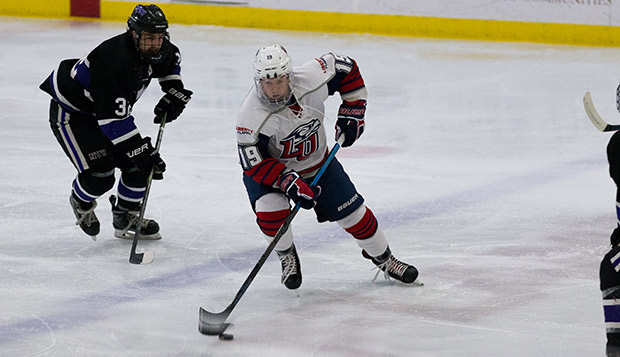 Taking on defending national champion Adrian College on its home ice this weekend gave Liberty University's ACHA Division I men's hockey team a good barometer of where it stands and what improvements it needs to make in order to contend for its first national title in March.

For the second night in a row, the fifth-ranked Flames (8-2-1) hung with the No. 1 Bulldogs (8-0-0) for the better part of two periods before allowing Adrian to score six of the final seven goals, four in the second stanza. The 6-3 victory, the Bulldogs' 28th in a row, completed the series sweep and extended their run of success at Arrington Ice Arena to 43 games over the past three seasons.

"The biggest thing for us was we played a lot better today than we did (in Friday's 8-2 setback)," Liberty Head Coach Kirk Handy said. "In the first and third periods, I liked our game. We need to keep learning and making the most of the opportunities to grow and move forward as we move into the rest of the season."

The Flames ended a scoreless tie with 5:17 left in the first period when sophomore forward Jordan Bochinski sent a perfectly placed stretch pass up the ice to junior forward Victor Blomberg, who skated onto the puck before slipping it past the Bulldogs' goalkeeper on a breakaway for a 1-0 lead.

"It was a fantastic pass and a great finish," Handy said.

Liberty leaped out to a 2-0 lead less than a minute into the second period. Quinn Ryan controlled the rebound off fellow Flames junior forward Brock Thompson's shot from the high slot and scored from point-blank range.

But the Bulldogs retaliated with two goals over the next five minutes, the first on a power play. Ryan reclaimed the lead for the Flames in the closing seconds of a power play at the 9:22 mark. He received a pass from junior defenseman Jacob Fricks and flicked a wrist shot from the high slot over the glove of Adrian's goalie for a 3-2 advantage.

"Quinn Ryan played an excellent game for us today and had a good weekend overall," Handy said.

However, after Liberty senior goalie Josh Halpenny (36 saves) stopped a penalty shot with his blocker, the Bulldogs responded quickly once more, tying the contest at 3-3 less than a minute later.

With just under a minute remaining in the period, Adrian defenseman Jordan Oshowy capitalized on an odd-man rush with a shot in the left crease for a 4-3 lead.

Then, just two minutes into the third, Justin Fisher pushed the Bulldogs' advantage to 5-3 by stealing the puck deep in the left circle and firing a shot past Halpenny. The teams waged an even battle for the next 15 minutes before Brenden Stanko put the win on ice for Adrian with a power-play goal on a slap shot from the slot with 2:57 to play.

"They scored two power-play goals on us, so we have to eliminate some of those penalties and not put them in those (man-advantage) situations," Handy said. "In the third period, we outshot them 17-9 and played one of our better periods of the year. There are some refinements we've got to make in areas of our game. They are all things that we can fix in order to take that next step — to go from being a good team to being a great team."

Liberty returns to the LaHaye Ice Center next Friday and Saturday nights for a critical ESCHL series with Stony Brook.

"It'll be another big test for us," Handy said. "We have some big conference games coming up. We will look at videos this week and see how we can get better for Friday night."