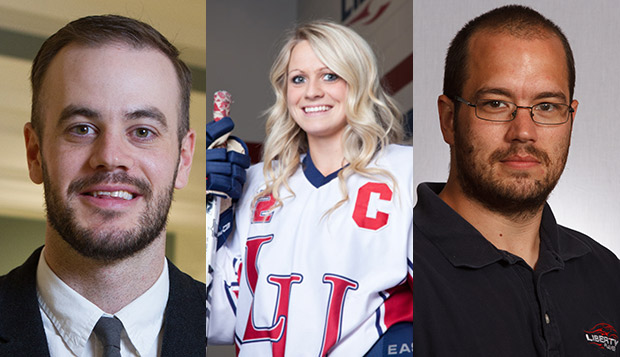 The three new members joining the Club Sports Hall of Fame were announced Wednesday. Former ACHA Division I men's and women's hockey players Mike Binnie ('08, '10) and Stacey McCombe ('13) will join Todd Hoglund (M.Ed., '09), who started the Club Sports paintball program in 2008, in the incoming Class of 2018. They will be officially inducted at the fifth annual ceremony set for noon on Saturday, Dec. 8, at the Hancock Welcome Center.

Binnie, who earned bachelor's and master's degrees in Sport Management at Liberty, helped the Flames transition from the Division II to Division I level of the ACHA, playing two seasons in goal at both levels from 2004-2008. He was a first-team ACHA All-American and team MVP as a junior in 2006-07, when Liberty finished its first season at the DI level ranked No. 6 in the nation. As a senior, he repeated as a first-team ACHA All-American and team MVP and made the All-ACHA DI National Championships first team in leading the Flames to a No. 4 ranking.

Binnie maintained a career goals-against average of 2.56 and ranks second all-time in minutes played (4,116). He served as an assistant coach for the DI team and as a Club Sports events coordinator from 2009-14. He also served as goalies coach for Hockey Ministries International's Teen Ranch Canada and for the Lynchburg Youth Hockey League.

McCombe, a native of London, Ontario, had a stellar three-year career as a forward at Liberty from 2010-13, serving as team captain as a junior, when she was named team MVP and the Club Sports Female Athlete of the Year, and a senior, when she led the Lady Flames to their first ACHA National Championship Final Four appearance. That year, she earned both first-team All-ACHA All-American and All-Tournament recognition.

McCombe finished tied for second with seven game-winning goals in a single season and ranks fifth all-time in career goals with 65. She is married to ACHA DI men's hockey standout forward Andrew McCombe ('14).

Hoglund guided the Flames to three top-four finishes at the National Collegiate Paintball Association National Championships in Kissimmee, Fla., from 2009-12. He also helped bring the Liberty Paintball Field Complex to East Campus and established goals of a national title, eventually realized by his successor, Brian Davidson, this past spring.