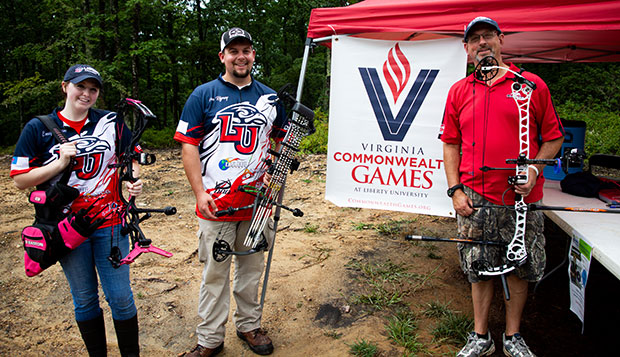 Liberty University men's and women's archery Head Coach Ian Rigney now has a fixed home for the Flames' and Lady Flames' Club Sports teams with the construction of a 15-target 3D outdoor range on 30 acres near the Liberty Mountain Gun Club (LMGC).

"It is now pretty much a permanent spot and it is definitely a blessing," Rigney said, noting that the course has been relocated six times since 2008 due to construction projects, starting with Liberty University College of Osteopathic Medicine. "We've been on the same mountain since 2011 and have gradually moved up the mountain."

The new course, one of the finest in the state, was tested in a tournament format for the first time this past Friday and Saturday when 33 archers competed in various divisions of the Commonwealth Games' 3D archery event, hosted by Liberty for the third year with Rigney serving as tournament director.

In 2016, the competition was held at a course across from the Hydaway Outdoor Recreation Center before being moved to a temporary course set up in the woods near the Liberty Equestrian Center last summer. There are plans for an indoor archery range to be constructed at the LMGC in the future, but for now, Liberty is using an area of the Equestrian Center's indoor arena for its indoor practice facility.

As a team member at Liberty from 2011-15, Rigney won four of the Flames' 10 individual and team national titles to date. He graduated in 2016 with a degree in theology and apologetics before earning his master's in theology in 2017.

"Our archers are very excited about the new facility and being able to prepare on the same type of course they'll be shooting on at nationals," Rigney said.

Last month, the program received a shipment of 20 new 3D targets from Delta McKenzie at half price after the Utah-based company heard about Liberty expanding its LMGC shooting sports complex to include archery. In the future, the course has room to expand to 30 lanes to showcase the 40 3D targets Liberty now owns, ranging from sitting and standing deer to bears and pigs as well as African wildlife such as hyenas and cheetahs.

"They're all set up at different distances, anywhere from 1-45 yards, and different angles as far as incline and decline shots, shooting uphill or downhill," Rigney said.

The true-to-life-sized targets are marked with bullseyes around the animals' vital organs to determine points per hit. The archers' scores per arrow range from a 5 for hitting anywhere on the body outside the vital organs to a 10 for hitting the lungs and a 12 for a heart shot.

Incoming freshman Hala Skelton, who competed for Liberty at the USCA National Championships in Las Vegas in February, won the women's compound division with a 314 total (out of a possible 360) after two rounds. Only Nathan Wimmer (328) and Jacob Perdue (320), who finished first and second in the men's open division, recorded higher scores over the two-day competition.

Rigney, who had competed in the previous 11 Commonwealth Games, and rising senior Lewis Boyd, who was a part of indoor and outdoor national bowhunting titles last season, shot rounds of 208 through 19 targets and 280 through 26 targets, respectively, before heavy rain prevented them from finishing.