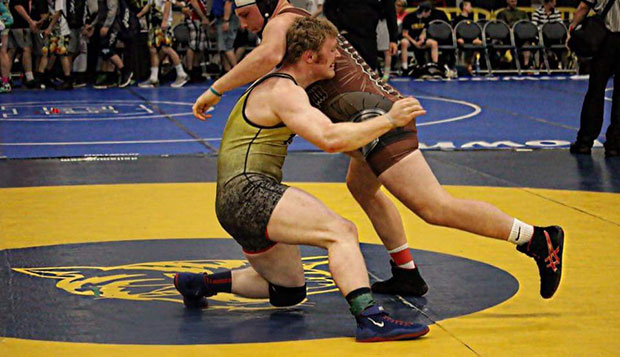 Jeffrey Allen, who redshirted his freshman season on Virginia Tech's Top-10 NCAA Division I wrestling team, is currently taking summer school classes through Liberty University's online program and will join the Flames as a full-time student-athlete this fall.

"This is basically home for me," Allen said. "It's close, and it's exciting. It's good to do what you know and what you're most happy doing, so I'm excited to be a part of (Liberty's wrestling program)."

He hopes to make an immediate impact for the Flames as they seek an eighth consecutive MAC tournament championship and to defend their NCWA National Duals and NCWA Grand National Tournament titles.

"We'll have a really good team this year," Allen said. "Coming off the season they just had, I'm sure there's going to be nothing but good energy out on the mats. There's a lot of good guys coming back, and hopefully I can make everyone around my weight class better and I can get better myself. I want to win the (Mid-Atlantic) Conference and win a national championship. That's my mentality."

Allen, who began wrestling in middle school after being cut from the basketball team, worked out from time to time with college participants in the Virginia Gold Wrestling Club, led by Flames Head Coach Jesse Castro and Assistant Coach Chris Williamson.

"I really love Coach Castro, and I'm excited I get to work with him," said Allen, who prepared for college by practicing under his supervision following his senior season. "I have fond memories of training with the program on and off since seventh grade. Liberty used to be an NCAA Division I program, so Castro was and still is a Division I-level coach. He has good workouts and holds people accountable."

Allen compiled a 156-13 mark at Amherst, wrestling at 195 pounds his first three seasons and 220 as a senior, when he was named the All-Area Wrestler of the Year by The News & Advance. The only year he did not win a state title was his sophomore season, when he finished 50-1 with his only loss in the final.

He was a finalist in the 2016 Junior National Championships in Fargo, N.D., where he was a four-time All-American in freestyle and Greco-Roman wrestling, and twice placed in the National High School Coaches Association national championships. As a senior, Allen placed second at the Beast of the East in Newark, Del., and fourth at the Walsh Jesuit (Ohio) Ironman national tournament, accounting for the only losses of his 38-3 season.

He is approaching his first season at Liberty with the same work ethic he established in high school and at Virginia Tech.

"Wrestling for a Division I program definitely toughens you up," Allen said. "It's no joke. Every day you've got to be on top of your game. They expect maximum effort, no excuses. You've got to be ready to lace up your shoes and go."

Never satisfied, he is always looking to elevate his game and hopes to do the same at Liberty.

"I'm training hard, lifting four or five days per week right now," Allen said. "I've always been a very competitive person. Anywhere I go, I'm going to try to get the most takedowns and the most pins. I try to be consistent when I practice, always pushing myself to be more disciplined. I want to be as perfect as I can in training, always seeing what I can do to get better — nothing complicated, just doing everything well. That is my philosophy."

At Liberty, he plans to pursue a degree in either sport management, exercise science, or athletic training.

"I want to be a conditioning coach and hope to work in one of the weight rooms at Liberty, either strength and conditioning with football or one of the other men's sports or working as a wrestling coach at a university. That would be my dream," Allen said, noting wrestling for the Flames should help him reach those goals. "I always like to have something I'm working toward. Wrestling is good motivation and helps me stay focused."