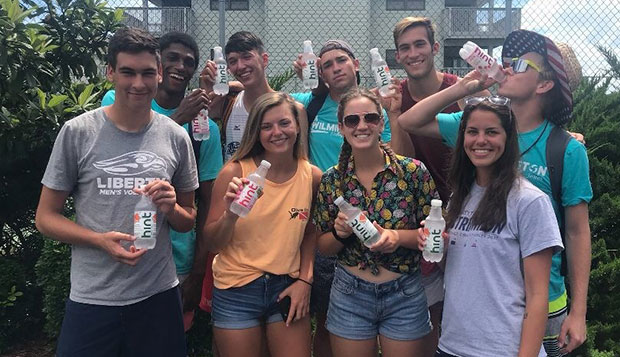 The standout setter and middle hitter duo from the Flames' men's indoor volleyball team, was one of three men's tandems as well as three women's pairs Liberty entered in the AA bracket. Graduate Caleb Pitcher and rising senior David Muller finished third after losing in the semifinals to a team from Wilmington and winning their consolation final.

"The guys played really well all day and two of our pairs showed that they could have played up in the open division," Flames Head Coach Kaleb VanDePerre said. "Kaden and Gene came into the day expecting to win and they delivered. This was Caleb's and David's first tournament playing together this season and they did a lot of things well."

Former indoor players Joel Slaughter and Zach Martyn also competed for the Flames, placing ninth out of 22 teams after dropping their silver bracket finals match to a team from North Carolina State.

"I was super proud of the way they played and got better as the day went on, and I expect great things for them in the future," VanDePerre said.

"It was a great learning experience," VanDePerre said. "They played well for the day and were getting better each match. Overall, the girls didn't have a great weekend as a team, but it was a good wake-up call to things we need to work on at practice."

He was most pleased to see the Flames and Lady Flames maintain a positive witness on and off the court.

"I was happy that we intentionally engaged with people we hadn't met or seen in a while and am confident that we represented Christ and Liberty in a very positive way both on and off the sand," VanDePerre said.

The Flames and Lady Flames will host a National Collegiate Sand Volleyball Association (NCSVA) tournament this Saturday at 9 a.m. before traveling to Virginia Beach for a Big Money event on July 7. Liberty will then host the Commonwealth Games beach volleyball event over Main Games Weekend on July 28 before sending its top men's and top women's pairs to the NCSVA National Championships, set for Aug. 1-2 in Huntington Beach, Calif.