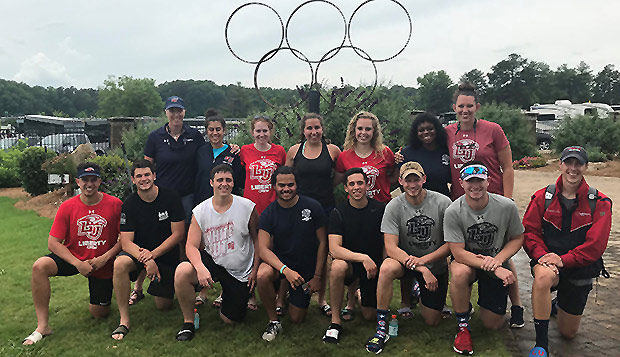 Members of Liberty University's men's and women's crew teams got a chance to row side-by-side with the fastest club-level programs in the nation at Saturday's and Sunday's American Collegiate Rowing Association Club Championships on Lake Lanier in Gainesville, Ga.

"It was a really good learning experience," Liberty Head Coach Debbie Prowse said. "It was definitely an eye-opener for some of them to see racing of that caliber and to row against higher levels of competition. Now they see the end result and can come into next season with experience of what it takes to win a medal at the national championships."

Liberty sophomore Ryan Krupansky steered his Men's Single to his team's best showing in Saturday's time trials, placing 16th on the 2,000-meter course in 8 minutes, 9.7 seconds to qualify for the afternoon semifinals. There, he placed eighth in 9:15.496 to advance to Sunday's Men's Single final, where he again finished eighth in 12:38.622.

The Flames' Men's Double tandem of senior Dave Jensen and freshman Mike Pryor crossed the finish line 19th in Saturday's time trial in 7:49.7. That sent Liberty's boat directly to Sunday's six-boat C final where, after a torrential downpour, the Flames finished fourth in 8:21.106, edging out a Northwestern pair by less than a second.

"Due to predicted storms on Saturday, instead of doing heats the race directors decided to err on the side of caution and move to a time trial, much like we had at the SIRA Championships," Prowse said. "They were able to run semifinals, but weren't able to do a repechage which could have allowed our boats to advance into the finals."

Liberty's Men's Novice 4 finished 24th in Saturday's time trial in 7:36.8 before its Women's Novice 4 placed 18th in 8:56.6. The Flames' Men's Novice 4 advanced to Sunday's three-boat D Final where it finished runner-up to the University of Washington in 7:50.0 and the Lady Flames reached the Women's Novice 4 C final, rowing to a runner-up showing to Vanderbilt in the two-boat race in 9:21.5.

Prowse said the Memorial Day Weekend experience has motivated her rowers to return with more determination in the fall and to set higher goals for next spring's championship season. A few have even purchased indoor ergs to keep rowing on their own, complementing running, cycling, and weight training workouts over the summer.