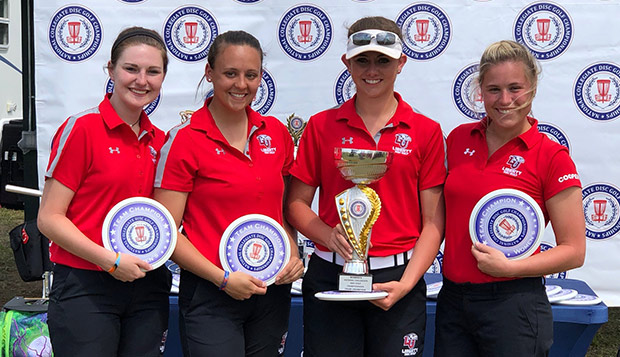 The Lady Flames dominated the field with a five-round total of 372, 40 fewer shots than runner-up Southern Arkansas (412) and 65 fewer than third-place Oregon (437).

"They played really well together (in doubles); that was the biggest thing," Liberty Head Coach Steve Bowman said, noting that the highest the women had placed in previous national tournaments was third.

"By winning the Championship flight, that secures all of our teams' bids to nationals for next year," Bowman said.

Liberty's men's first flight foursome of freshman Trevor Staub (tied for 12th at 114), graduate Jeremy Miekley (tied for 17th at 116), sophomore Christian Wilborn (tied for 22nd at 117), and sophomore Taylor Nicol (tied for 29th at 119) all placed in the top half out of 80 individual players. They paced the Flames to a third-place team showing out of 20 teams with a total of 654 shots, trailing only North Carolina State (643) and Iowa State (651) after six rounds.

"Singles kind of hurt us on that day for both (First and Second flight teams)," Bowman said. "Our doubles increasingly got better and better and both teams had chances to climb to second place, but left a few shots on the course and gave up some strokes."

Liberty's men's championship flight team of juniors Hunter Thomas, Ryan Shumate, and Zach Biscardi, and freshman Pete Curran wound up tied for 18th out of 35 teams after an up and down four-day tournament.

"There was a lot of inconsistency across the board for them," Bowman said. "They started off strong on the first day before they went into a lull and got passed on the second day. On the third day, they passed a couple teams back only to drop a couple more places in the end."