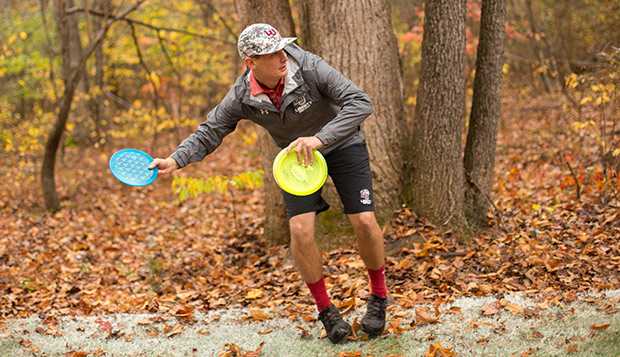 Junior Hunter Thomas, shown teeing off with a forehand drive, played on Liberty's winning A team for Saturday's and Sunday's Flamethrower Invitational on the Hydaway and East Campus courses. (Photo by Kevin Manguiob)

Liberty University's disc golf team qualified for the April 11-14 National Collegiate Disc Golf (NCDG) National Championships in North Augusta, S.C., by capturing first place in its seventh annual Flamethrower Invitational. The two-day tournament, which offered three national qualifying bids, drew the largest field to date with players from 10 universities competing Saturday in doubles and singles on its 20-hole course near Hydaway Outdoor Recreation Center and Sunday for a final doubles round on its East Campus course.

The Flames' top foursome of juniors Zach Biscardi, Ryan Shumate, and Hunter Thomas, and sophomore Christian Wilborn shot respective singles rounds of 59, 65, 66, and 67 on Saturday afternoon. They claimed the overall team title with a 375 total, factoring in their doubles scores of 62 on Saturday and 65 on Sunday.

"They had a four-stroke lead going in and we ended up winning by four strokes," Liberty Head Coach Steve Bowman said. "The East Campus course is not as long as the one at Hydaway, which has a lot of tight lines and precarious shots that help with our mental approach and preparation for nationals."

Liberty's B foursome of graduate Jeremy Miekley, freshman Trevor Staub, sophomore Jesse Miller, and freshman Pete Curran placed fourth overall with a combined score of 385, including posting the tournament-low doubles rounds of 57 on Saturday and 56 on Sunday, tying the Flames' A team score.

Liberty was the only school to enter a complete women's team, led by graduate Heather Wyatt, who shot a round of 77 in Saturday's singles play to edge Clemson's Alex Lambert by one stroke for the individual title. Lady Flames' newcomer Cortney Cooper, a senior who joined the team on Tuesday, finished third overall at 89 and teamed with Wyatt to record rounds of 79 and 76 in doubles play.

"It was our first time playing doubles in a competitive tournament together, so I think we did really well with that," said Wyatt who started playing disc golf over the summer. "We did a good job of listening to each other and setting each other up for shots. When one partner kind of failed, the other one picked it up, so there really wasn't any throw that we couldn't do anything with."

As a foursome, Liberty's women totaled 513 for the weekend and this will be the first time in two years that it will have a complete team competing at nationals.

The Flamethrower Invitational was Liberty's last collegiate event of the Fall semester, but it will host the opening tournament in the Blue Ridge Area Winter League (BRAWL) Series on Dec. 2, utilizing both of its 20-hole courses. 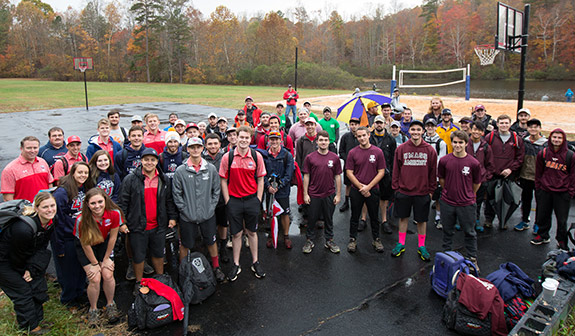 The Flamethrower Invitational drew teams from a record 10 colleges. (Photo by Kevin Manguiob)