Lady Flames bounce back from loss to split Minnesota series 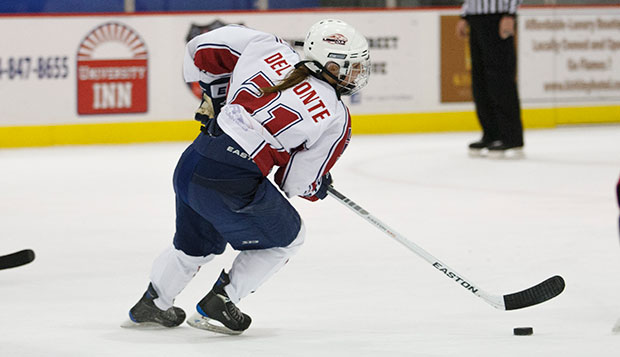 The Lady Flames Division I hockey team began its four-game road trip with a 4-1 loss to the University of Minnesota Friday night, but quickly recovered and handed the Gophers a 3-2 loss Saturday.

Liberty played Minnesota Friday and Saturday in Madison, Wis., and face the University of Wisconsin at the same rink Monday and Tuesday.

A 17-hour bus ride appeared to have taken a toll on the Lady Flames as they came out flat against Minnesota on Friday. The Gophers scored on a power play at 15:00 in the first period. In the second, Minnesota built the lead up to 3-0, scoring five minutes in and again on a power play with 5:06 remaining.

In the third, Stacey McCombe scored Liberty's lone goal of the contest on a power play off of a Sarah Stevenson assist at 13:29. Minnesota would score again with just under nine minutes left to play for the final margin.

Liberty brought renewed energy into the sophomore matchup, playing as a team on a mission. After a hard-fought first period, the Lady Flames were rewarded with a 1-0 lead, thanks to a late score by Carrie Jickling from Amanda Grainger.

Minnesota answered five minutes into the second, tying the score, but seven minutes later, Liberty restored its lead. This time, Jickling assisted Grainger to the goal.

The Lady Flames scored again in the third to push the lead to 3-1. Minnesota launched a late offensive, resulting in another goal, but Liberty held on to claim the W.

Liberty will return to the ice in Madison Monday and Tuesday, facing an equally strong Wisconsin team.