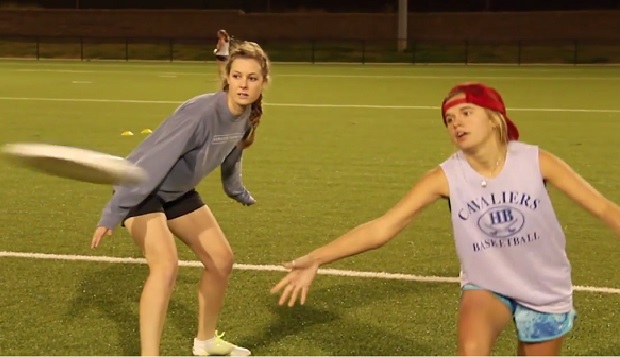 Liberty senior captain Jillianne Hook (left) guards a teammate during practice as the Lady Flames gear up for the postseason.

On this edition of "Face to Face," Liberty University Club Sports Video and Media Specialist Monika McKenzie sat down to talk with women's Ultimate team captain Jillianne Hook about the sport and her senior season as well as her recent recovery from melanoma skin cancer.

The mathematics and English major from Dexter, Mich., was about to return to Liberty for the start of the fall semester when she was diagnosed with the condition.

"In August, I went to the dermatologist about a mole on my leg," Hook said. "He called me the next week and said, ‘So, you have cancer, and here are the things you need to do.' He said I had melanoma, which is the most serious form of skin cancer, so that was kind of scary. It definitely was a lot to wrap my mind around. I cried a lot. Through it all, I found a peace in knowing that if this is what the Lord had planned for me in my life, then that was something that He would prepare me to deal with. I didn't think that skin cancer was that serious, but melanoma is on the same level as breast cancer in terms of seriousness of cancer. I was faced for the first time with the thought of ‘This could kill me. I could die from this.'"

She had surgery at the University of Michigan Hospital, which has one of the best melanoma clinics in the world. Her recovery was slow, but, by the grace of God, complete.

"I didn't have to have any chemotherapy and I was able to go back to school when I was supposed to and get started on my classes, so that was really a blessing," Hook said. "I could walk right after surgery, but I didn't run until six or eight weeks after surgery. It was frustrating not to be able to play, to be around my friends who were playing and having fun, but it also gave me more appreciation for what I can do and now that I'm mostly back to normal, it just makes me value the ability to play a lot more."

She has high levels of ambition for her personal performance and the Lady Flames' postseason goals.

"My personal goals are to get back to the level of fitness that I was at before surgery and to actually surpass that," Hook said. "I'm hoping to be faster and be able to jump higher. My goal for the team is to end up going to nationals for the first time in the program history at the end of the season."

Win or lose, Hook and her teammates want to demonstrate a level of sportsmanship that will reflect their Christian faith.

"Ultimate is unique from other sports and one of the aspects is that is idea of the spirit of the game, which basically means that following the rules and having integrity is more important than winning or losing," she said. "It's definitely taught problem-solving. You have to do a lot of conflict resolution. If there's a foul that occurs, you talk it over with the opposing team and it's not officiated. It's officiated by the players and that really means that you have to understand how the game is played, you have to understand the rules, and you also have to work with people with whom you don't necessarily agree."