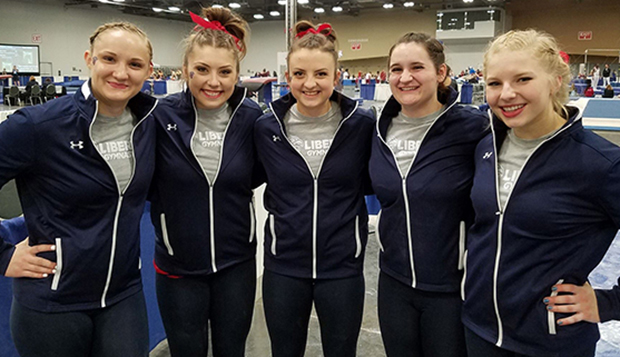 Solid performances across the board, but particularly on the vault, catapulted Liberty University's women's gymnastics team to a best-ever fourth-place team finish in the Collegiate division at Saturday's National Association of Intercollegiate Gymnastics Clubs (NAIGC) Championships, held at the Columbus (Ohio) Convention Center.

"It was an amazing weekend and by far the most successful performance at nationals of any Liberty Gymnastics team in school history," second-year Head Coach Tim Kappel said. "The team got a lot of exposure and I was pretty happy with the consistency over the weekend. Obviously, we would have liked to have walked away with the overall title, but it's progress, a pretty good step."

"We were only a few tenths of a point out of third place and team medal contention and that was, hands-down, the most individuals who have ever made finals," Kappel said, with top-16 preliminary performances out of approximately 200 competitors.

Senior Ashley Grim, Bouton, and Johnson paced the Lady Flames on the strength of their combined showings in the floor exercise (28.3) and on the vault (28.05), which was the highest team score in the competition.

"The (uneven) bars kind of bit us, but we were the No. 1 team on vault for the whole event," Kappel said.

Grim narrowly missed the All-Around finals cut after a fall on her preliminary floor exercise routine took her out of contention.

"Ashley's (floor exercise) scores only counted for the team and not individually or in the All-Around or she would have been in second place for the whole thing," Kappel said. "She looked at me after the finals and said, ‘I just had the best meet of my entire life so I really can't complain.'"

Meanwhile, in the men's Collegiate competition, senior Austin Minuto and junior Cameron Streeter represented the Flames but did not advance out of Thursday's preliminary rounds in any individual event.

"The men had a good meet," Kappel said. "Unfortunately, it was a tough competition and they did not qualify for finals."