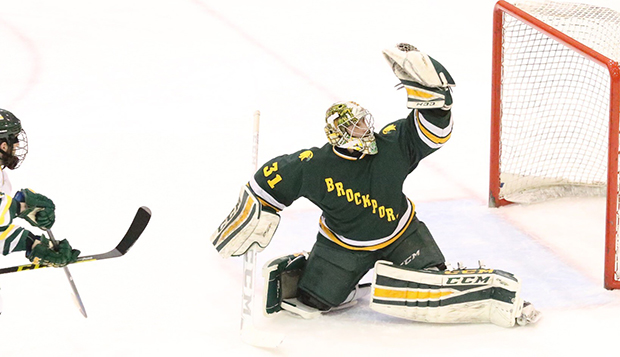 Cole Burack reaches high to make a glove save for SUNY Brockport, an NCAA Division III program near Rochester, N.Y.

On Friday, Flames Head Coach Kirk Handy finalized the first recruit of this weekend's annual Hockey Prospect Camp — held in conjunction with Liberty's College For A Weekend (CFAW) — when Cole Burack, a rising junior transfer from NCAA Division III SUNY Brockport, committed to join the team in the fall.

"Cole's a great fit for our program," Handy said. "From our coaching perspective, he's someone who desires the culture that we have here at Liberty with the hockey program and he wants to come here to push our team to be the absolute best it can be. We're super excited to have him."

Burack, who grew up near Dallas, Texas, playing against current Flames sophomore defenseman Zane Schartz and with him one season on the Dallas Stars' U16 team, submitted a highlight video to Liberty goalie coach Dan Berthiaume at Schartz's suggestion. Berthiaume, who played several seasons in the NHL and with the Roanoke Stars in the ECHL, saw something of himself in the 5-foot-10 prospect.

"Dan really liked how aggressive I played and that's a big thing for me because I'm a smaller goalie," Burack said. "I sent him some recruiting video and he really likes my style of play because it's a lot like he used to play. I've still got to work on being as aggressive as I can to take away as much net as possible to make up for my lack of size."

Burack considers himself a very technical goalie, having trained for several years under Pittsburgh Penguins goalie coach Mike Buckley since staring his Junior "A" career in New Hampshire. He patterns his playing style after former Dallas Stars goalie Marty Turco, who he grew up watching.

"He could be technical at the times he needed but also had the creativity to make an unbelievable diving save that's not technical at all," Burack said.

"Dan wants someone who's got basically three qualities: One, that they have a great attitude, two that they compete hard on the ice, and three, that they have the skills to play at this level, and Cole has all of those," Handy said.

"We had a great few talks on the phone and once I got here, it's been perfect," he said. "Having a goalie coach that's going to be here full-time was a huge draw for me and Dan and I really hit it off. We're already building a great relationship and that's one of the huge reasons I came here, not just him but all of the coaches. They just have a huge wealth of knowledge and I'm really trying to learn as much as I can from all of them."

For Burack, who plans to major in kinesiology, his first visit to Liberty left him awe-struck by the state-of-the-art facilities and enamored with the student experience and Christian atmosphere.

"It really just blew my mind," he said. "Once you see it, walking through classes, it becomes real. It's really going to be good for me to learn spiritually from those who are more experienced, being around hockey players that are like-minded in faith with me. That's something totally new that I've been missing for a long time and I'm really looking forward to that."

Berthiaume had a chance to see Burack practice in person for the first time.

"I had a couple goalie sessions with him (Thursday) and I'm really happy with what I'm seeing from him," Berthiaume said. "He plays big in the net. He's compact, but he moves really well. With him and Josh (Halpenny), we'll be solid in goal for the next two years. They're a little different in style. (Burack) challenges a little bit more, but they're both fast and they both want to learn and they work hard."

He expects both to play integral roles in leading the Flames back to the ACHA Division I National Championships and experiencing a longer stay next March in Columbus, Ohio.

"We're excited about having him here next year," Berthiaume said. "He wants to try to bring a championship here and he heard that there's a chance that in two years, (the ACHA tournament) will be in Dallas, so he's excited about that."

With 20 freshmen and sophomores forming the foundation of this past season's team, there's only room for a few more forwards, two more defensemen, and one more goalie on the Flames' roster for next year.

"Hopefully, we'll get the other guys that we're after and put the championship team together here," Berthiaume said.