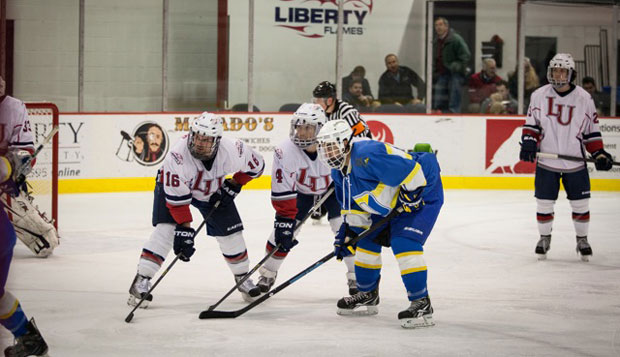 Despite an aggressive offensive attack, and outshooting its opponent 37-23, the Liberty Flames Division I men's hockey team fell at home 2-1 to the University of Delaware, defending American Collegiate Hockey Association national champions.

Though the Flames were on the defensive in the opening minutes, Liberty turned it up, launching a strong offensive campaign for the bulk of the opening period. Liberty outshot Delaware 13-6 in the first period. The aggressiveness on Liberty's end led to many scoring opportunities, but Blue Hens' netminder Noble Tucker held his own, keeping the Flames scoreless and picking up a huge save with time expiring on an Andrew McCombe breakaway.

Intensity spiked in a heated, physical second period where Delaware came out guns blazing, managing to outshoot Liberty 10-9. Flames goalie Clayton Brown held off multiple attacks and kept the Hens off the scoreboard in the period. About halfway through the second, Steven Bellew made good on a power play attack to put Liberty up 1-0. He was assisted by McCombe and Kyle Garcia.

The Blue Hens did not allow a one-goal deficit and roaring, near-capacity crowd swing the momentum to heavily favor the home team, as they launched an aggressive third period campaign. Even with the Flames on a power play, Delaware managed to control the puck, pushing it ahead for a breakaway goal just over three minutes in. Liberty poured on some heavy offense in response and saw ample opportunities to regain control, but Tucker knocked away several well-aimed slap-shots and rebounds.

Delaware found the back of the net again with about eight minutes left in the game, as Hens' leading scorer Christopher Volonnino beat Brown glove side on the attack, high corner.

Liberty outshot the Blue Hens 15-7 in the third period, as the home team desperately looked for the equalizer, to no avail.

Saturday at 7 p.m., the Flames will look for redemption in the grudge match.