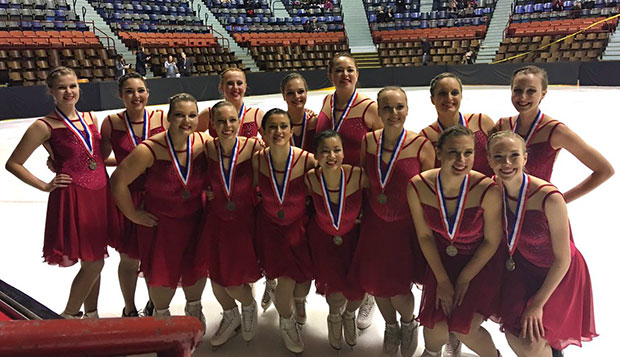 "This was our last event of four this season and the girls skated well," Liberty Head Coach Tatiana Payne said. "There was a very broad stream of skill level represented, but it was probably one of the most competitive collegiate open fields we've ever seen at Eastern Sectionals, so we were very pleased to take third. That's the highest we've ever place and given that we were skating against 10 other schools, it was a strong finish."

Payne was confident the Lady Flames would medal, but wasn't sure if they would improve upon their showing from the Jan. 14 Mid-America Championships in Fraser, Mich., where they placed fourth.

"We had an idea going into sectionals we were one of the top four or five programs, based on last year's event," she said. "In the end, it came down to who skated the best on competition day."

"The leadership and the character displayed throughout the year by our captains (including junior Katherine Thacker) and by Leah Cowan, and the overall camaraderie on the team was fantastic," Payne said. "Those two skaters will be greatly missed. We are hoping and praying that God will bring the right people to the program for next year."

Payne and Assistant Coach Emily Halvorson are already in the process of planning the routine for the Lady Flames to skate to next season. They hope to move up to the Collegiate Division, which would make them eligible to qualify for the U.S. Synchronized Skating Collegiate Nationals.

"We're definitely looking to build on what we were able to accomplish this year," Payne said. "We already have the theme picked out and the music selected for next year and we really want to move up to the collegiate level, so want to make sure we have the right skaters on our roster."