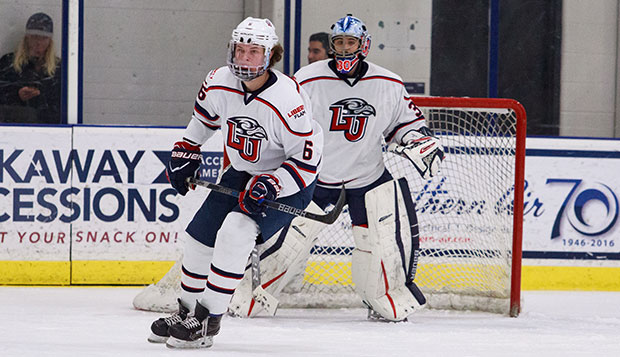 Memories of the last time Liberty University's ACHA Division I men's hockey team visited ESCHL foe Rutgers for a single game on Dec. 4 were fresh in the minds of the Flames during Sunday afternoon's rematch at ProSkate Ice Arena. On that day, Liberty watched a 3-0 lead late in the second period turn into a 5-3 setback that prevented a three-game road sweep.

So when the Flames opened a 4-0 advantage by the end of the first period, they didn't become complacent, but instead acted quickly to extinguish two Rutgers rallies. Coming off back-to-back losses at Delaware, Liberty stopped the bleeding and scored the final two goals to clinch a much-needed 7-3 victory over the Scarlet Knights.

"We challenged our guys before the game and believe we had a solid effort tonight," Flames Head Coach Kirk Handy said. "We obviously were aware of the last time we played them, and the first period was almost scripted the same way. This time, when Rutgers did push back on us, we had a response."

The Scarlet Knights capitalized on power-play opportunities to score twice in the first five minutes of the second period. That cut Liberty's lead in half before sophomore forward Zak Hayes answered to extend it back to three goals at 5-2. Then, when Rutgers narrowed the gap to 5-3 with 12 minutes left in the game, freshman forward Cody Clarke delivered a clutch counter punch, converting off a turnover in the offensive end to stretch the Flames' advantage to 6-3.

It was the second goal of the game for Clarke, who started the scoring less than two minutes after the opening faceoff by finishing a putback of a shot from the perimeter by fellow freshman forward Garrett Nelson. Liberty's leading scorer, junior forward Grant Garvin, capped the scoring with a power-play goal in the closing minutes.

"We were able to score on the power play tonight," Handy said. "It was a physical affair, for sure. It was their third game in three days and ours (as well), and you could definitely see the effects of that as the game went on."

In the offense-oriented showdown, the Flames outshot the Scarlet Knights by a 49-38 count. Liberty junior goalie Josh Halpenny made 35 saves, none bigger than the one he gloved in the final 15 seconds of the second period, stopping a fast-break opportunity that could have given Rutgers even more momentum going into the final stanza.

After Clarke's opening score, fellow freshman forward Josh Hamilton finished a feed from sophomore forward Zechariah Roberts directly off a faceoff for a 2-0 edge with 5:30 left in the first period. Three minutes later, Brock Thompson pushed Liberty's lead to 3-0 by putting away an assist from Quinn Ryan before fellow freshman forward Basil Reynolds's wrist shot from the point just 25 seconds later deflected off a Rutgers defenseman for a seemingly commanding 4-0 advantage.

"We played a great first period," Handy said, noting that the Flames outshot the Scarlet Knights 17-8 through the opening 20 minutes. "Thompson and Hamilton played solid for us, along with Cody Clarke and Grant Garvin, and Cody, Hamilton, and Thompson are all on different lines, so it was good to get them all going with a couple new line combinations."

Liberty returns home to conclude its Blue & Gray Cup series with Davenport on Friday and Saturday at the LaHaye Ice Center. Trailing 1-0, the Flames will need to sweep the Panthers to clinch the Cup for the first time since the 2013-14 season.