Flames fall to No. 1 Emmanuel in NCWA National Duals final 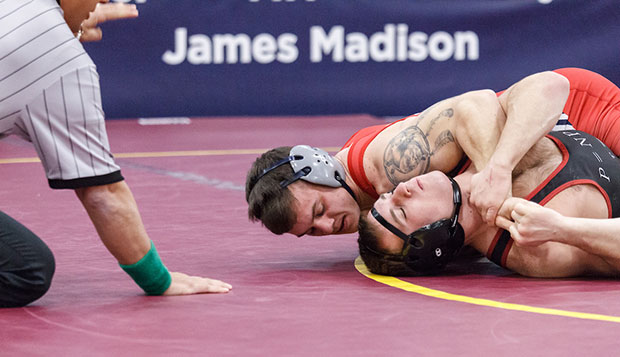 The unusual setting created an exciting atmosphere for the event and Liberty's wrestling team, seeded second, made the most of the home mat advantage by advancing to the championship bout. The Flames eventually fell to top-seeded Emmanuel (Ga.) College, 33-13, in the final, missing a shot at becoming the first three-time champion in the 12-year National Duals history. Liberty did keep its streak of top-three finishes alive at six, after reclassifying as an NCWA program in 2011.

"It was a good weekend," Liberty Assistant Coach Allen Hackmann said. "We're real happy. I'm super proud of the guys, wrestling through adversity against a tough team, and now we'll prepare for the next six weeks leading up to nationals."

Liberty will host the (Mid-Atlantic Conference) MAC Tournament in four weeks before heading to nationals in Allen, Texas two weeks after that.

After receiving a first-round bye on Friday, Liberty did not get out to the best start, escaping with a 25-19 victory over ninth-seeded Alfred State before dominating 12th-seeded MIT, 45-12. Still, the Flames weren't satisfied and took a different mentality into Saturday's quarterfinals, a 29-18 triumph over seventh-seeded Springfield (Mass.) Tech.

The highlight of the tournament for the Flames was their 34-15 semifinal victory over Grand Valley State, a team that had steamrolled Liberty in the semifinal round of last season's tournament. The Flames won four consecutive matches by major decision in the middleweights, from 165 to 197 pounds before senior 235-pounder Charlie Hancock recorded a third-period pin and sophomore Dominick Johnson won his heavyweight match by forfeit.

"They really beat us badly last year, so it was a big win for us," said Liberty senior 174-pound captain Josh Ferenczy said. "That match, we had a really good transfer of energy, spiritually, emotionally. It just transferred from one guy to the other and we kept chasing down the points, with major decisions, pins, whatever, and everyone just kind of rode this wave for the whole match and it was an awesome experience. I think it was the best dual meet we've wrestled in the past two years."

Liberty junior Tyler Sigler got the Flames started by pinning Grand Valley's Nick Reddy in 2 minutes, 41 seconds at 141 pounds. After receiving medical attention from Club Sports Athletic Trainer Angie Witt, Sigler later overcame a shoulder injury that left him writhing in pain to score a 16-7 major decision over Emmanuel's Will Hale in an intense championship bout.

"Tyler was doing everything he could to keep his limbs attached to him," Liberty Graduate Assistant Chris Williamson said. "He's had a rough day, but it was a great day. He's battling migraine headaches from being sick and we didn't know if he was even going to wrestle Grand Valley or forfeit, literally until he we saw him walk to the table. He set the tone for the match with that pin and then, he almost wasn't able to continue in his match (against Hale) and ended up majoring the guy."

Ferenczy, Liberty's only individual wrestler ranked No. 1 by the NCWA, said the cards were stacked against the Flames in the final against Emmanuel, which is transitioning to the NCAA Division II ranks and boasted five wrestlers ranked No. 1 nationally.

"Looking at that match, five of their 11 weight classes are ranked No. 1 so we knew going in, they were going to be super tough to beat," Ferenczy said. "We just tried to wrestle strong. It didn't go our way and it's tough to take a loss in the finals at any level. That's just something we've got to keep building on. At the end of the day, the (NCWA) Grand Nationals are what really matters. I think we're a better tournament team."

By placing second, the Flames were awarded 23 bonus points to be added to their team score at the March 9-11 NCWA Grand Nationals in Allen, Texas, though they will again have their hands full trying to dethrone Emmanuel for their second national title in three seasons as the Lions will start with 24 bonus points for winning the National Duals crown.