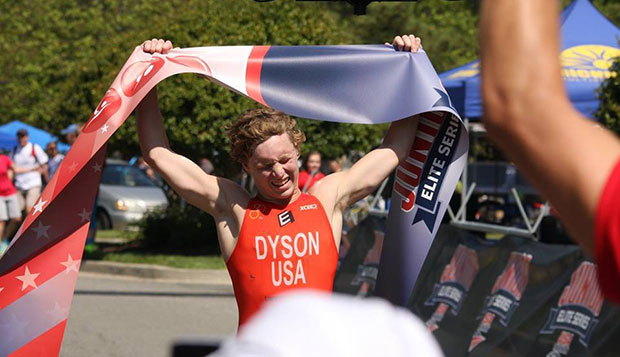 Stone Dyson, a professional triathlete who trained under Parker Spencer at Endorphin Fitness in Richmond, Va., will join the Flames cycling and triathlon teams in January.

Richmond, Va., triathletes Stone Dyson and Greg Schott — who is switching from studying online to residential and from competing in off-road to on-road races — and Charles Fernandez, a modern pentathlon competitor who represented Guatemala at the Summer Olympics in Rio, will give Sonnery-Cottet three more teammates to train and compete with as Liberty's men's team challenges for a USA Triathlon Collegiate National Championship this spring, April 21-22 in Tuscaloosa, Ala.

"Stone Dyson's already a professional triathlete and Greg Schott, who was a significant help to the cycling team last year, will be a tremendous help to the triathlon team," Liberty Head Coach Parker Spencer said. "Right now, Thomas is kind of on a different level because he's so good. Soon he'll have three guys that are going to be able to train with him and push him."

Both Dyson and Schott have trained with Spencer at Endorphin Fitness in Richmond.

"The connection between Endorphin and Liberty is starting to pay dividends," Spencer said. "It's really exciting because there's a lot of kids I've invested years into that are coming now as students and I get to invest in them at Liberty now. It's awesome for our team at Liberty to have these athletes that are really well trained and who can contribute to the whole culture we're trying to establish here."

Meanwhile, Blake Williams, a Liberty graduate who is returning to pursue a master's degree starting this spring after competing on a developmental cycling team in New Orleans, Gabe Morgan, a former competitive triathlete now focusing on cycling, and Wesley Fouse will complement King, with support from Dyson, Schott, and Sonnery-Cottet as the Flames seek to contend for ACCC and USA Cycling National Championship individual and team titles in their second season as a program.

"That's a game-changer," Spencer said, noting Schott, Williams, Morgan, Dyson, and Sonnery-Cottet are all Category A cyclists like King. "We placed third in the ACC last year so we should be really competitive to place first and bring a complete team to nationals instead of just Jake. His goal is to win the national championship and having those other guys on the team is huge. Now he's got a whole team of people who can support him at nationals, which is a long road race, especially this year's (May 4-7) at Grand Junction, Colo."

King spent part of this past semester in France, along with Lady Flames senior second-year cyclist Marie Sonnery-Cottet, Thomas's sister and King's fiancée, practicing cyclocross while coaching for a developmental cycling team.

"With Marie being an online student, her visa ran out, but she'll be coming back with him for the second semester on an engaged visa," Spencer said. "She was our only female cyclist on the team last year, and she wants to stay on the team, though she only has two classes left and may graduate online."

"Modern-day pentathlon includes swimming, running, shooting, horseback riding, and fencing," Spencer said. "He wants to join a team where there's multi-sport program and we will be working to prepare him for the next Olympic Games (2020 in Japan). I'm excited to be able to work with him. While I don't know much about horseback riding and fencing, I can do well with him on the cycling and the run, which he said is the hardest of them all."

In addition to the six incoming recruits, 25 current students have expressed interest in joining Liberty's triathlon team since Spencer spoke at Convocation in November.

"(Liberty Senior Vice President for Auxiliary Services) Lee Beaumont wants to have more kids on the team," Spencer said. "If we can get them all signed up, we'll have one of the largest teams in the country. It creates a really strong atmosphere for success. Practices will be run a little different, but it's a great problem to have."