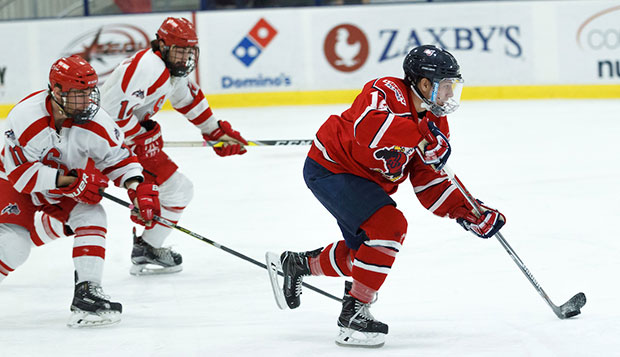 Liberty sophomore forward Owen Harris, who netted the game-winner in the first round of the shootout, skates past two Seawolves at LaHaye Ice Center. (Photo by Nathan Spencer)

After a scoreless five-minute overtime period, Flames sophomore goalie Blake Scott snuffed the No. 17 Seawolves on their three chances and sophomore forward Owen Harris netted the only goal of the three-round shootout with a backhander through the five hole to lift Liberty to a 3-2 victory.

"Owen came in and made a big-time move," Head Coach Kirk Handy said of Harris' score on the Flames' first try after Scott blocked Stony Brook's opening attempt. "Blake played well. It was his turn to step up tonight, and he stepped up."

In Liberty's first season in the league — which will expand from six to eight teams next year with the addition of Syracuse and 2015 DII national champion New York universities — it improved to 9-3-0, 5-0-0 in ESCHL play to move into sole possession of first place after No. 18 Delaware's loss to Rutgers.

"With it being a conference game, it was a huge one for us to win tonight," Handy said.

The Seawolves (5-5-1, 3-2 ESCHL) struck first in the opening minute of the second period when forward J.T. Hall, the reigning ACHA DI player of the year, stole the puck in the slot and snuck his shot through traffic in front of the goal and through the five hole into the back of the net.

The score remained 1-0 Stony Brook until the Flames netted the equalizer with 12:36 left in the third. Freshman forward Andy Clark — who deflected in a shot by Matt Cruickshank for his first goal last Saturday — launched a laser-guided missile from the blue line that sneaked through traffic in front of the cage past Liberty senior defenseman Zane Schartz and Stony Brook goalie Brandon Rathwell.

"Andy Clark's been injured and he's come back, and that's two games in a row he's been effective," Handy said. "He's the type of guy who battles every night and it's nice to see a guy like that be rewarded."

It took just 47 seconds for Stony Brook to reclaim the lead, moments after Flames freshman forward Josh Hamilton nearly did the same for the Flames when his shot in the right circle missed just wide right. Seawolves defenseman Frank Sherding skated around two Liberty defenders in the high slot before veering toward the right corner and crossing the puck into the right crease, where Hall finished past Scott for a 2-1 advantage with 11:49 remaining in regulation.

The Flames responded nearly as quickly to re-tie the contest only 53 seconds later when Schartz dumped the puck in from beyond the left side of the blue line and senior forward and leading scorer Grant Garvin — who assisted Clark's score — tipped the puck past Rathwell from in the left crease.

"Zane had a great night for us tonight," Handy said after the Flames outshot the Seawolves 36-21. "He just put it on net. It was a great play."

Stony Brook appeared to net the go-ahead goal with 2:52 to go in the third, but an official blew his whistle on the play, overruling it due to goalie interference.

Scott, who made 22 saves, including three in the shootout, used a poke check to deny forward Eddie Osowski in the left crease as the Flames poured out of their bench to celebrate with him.

"It's a good win," Handy said. "We have to come back tomorrow ready to go, though. It'll be another great game."

The puck drops at 7 p.m. once more in Saturday's Military Appreciation Night rematch between Liberty and Stony Brook, with active servicemembers and veterans admitted free with a military ID. Camouflage Flames jerseys will be auctioned off throughout the game.