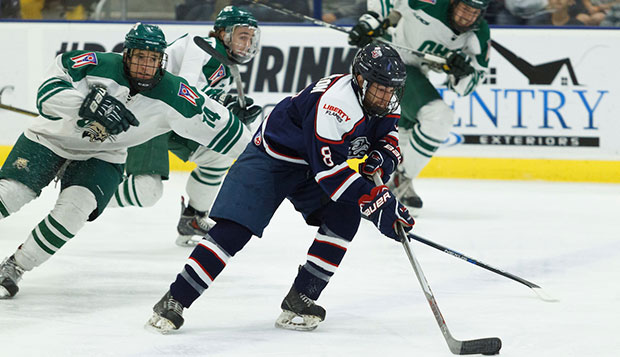 A sluggish start by Liberty University's ACHA Division I men's hockey team resulted in a 4-1 loss to fifth-ranked Ohio, Friday night at the LaHaye Ice Center, as the Bobcats extinguished the Flames' five-game winning streak and extended their run of success against Liberty to eight straight games.

"It's about us being ready to go and ready to execute and we didn't tonight," Flames Head coach Kirk Handy said. "Our power play wasn't connecting and we just had a below-average night and you can't have those. We're going to shake it off, we're going to bring our compete level way up tomorrow and be ready to go."

Ohio capitalized on the game's first power play with a well-executed fast break started by Jake Faiella on the defensive end with a short outlet pass to Joey Breslin. He worked a give-and-go with Liam Geither up the left wing before slapping a shot from the left crease past Liberty senior goalie Matt Pinel for a 1-0 lead less than three minutes into the action.

The Bobcats (9-1-1) leaped to a 2-0 lead with 8:51 left in the first period off another fast-break combination sparked by Patrick Hannan. He sent a cross-ice pass to Breslin who sent the puck toward Faiella posting up in the right crease before it bounced back out to Cody Black at the top of the right circle, where he fired a shot between the legs of Flames defensemen and Ohio forwards past Pinel into the left side of the net.

"They play really fast and they limit your time and space so they're a hard team to play, for sure," Flames senior defenseman and head captain Ben Hughes said. "They're just aggressive and I don't think we were ready for that right away, but we can definitely do better."

Just over three minutes into the second period, Ohio extended its advantage to 3-0 seconds after Pinel made back-to-back saves of a long-range shot by Jacob Houston from the high point and a high-percentage chance by Tyler Harkins from point-blank range in front. Harkins picked himself up along the back boards and gathered the puck before sending a quick pass back to Gianni Evangelisti for a one-timed finish from right in front.

Back-to-back penalties assessed to the Flames (8-2-0) gave the Bobcats a five-on-three power play for more than a minute. But Pinel made a few spectacular saves, including one on a point-blank shot by Thomas Pokorney off a backdoor, cross-crease pass from Harkins, allowing Liberty to extinguish the threat and stay within striking distance.

The Flames finally got on the scoreboard just over three and a half minutes into the third period when Hughes fired a wrist shot from the top of the right circle, off assists from junior forward Grant Garvin and freshman forward Quinn Ryan, which slipped past Bobcats goalie Jimmie Thomas through traffic in front of the cage created by Garvin.

But that was all the offense Liberty could muster on a night when it was outshot by nearly a two-to-one ratio, 41-22. Ohio added a final goal in the final 3.8 seconds after Matthew Hartman won a faceoff in the Flames' defensive zone and Alexander Vazquez's shot from the high slot was deflected through the five hole by Patrick Spellacy.

"We picked it up toward the end of the game on the power play, just a couple bounces didn't go our way," Hughes said.

"We had our chances tonight," Handy added. "The third period, there were moments where we looked like we were in the game and that was encouraging. We have full confidence in the guys in there, the work ethic and the time and energy they've put in. We will be OK. Everyone involved needs to hit the reset button and come back tomorrow ready to play. We just have to have a short memory, but we have to learn from these situations, everyone involved. Players, coaches, we didn't execute the way we needed to tonight so we're going to come ready to play tomorrow and change what happened tonight."

Faceoff for Saturday's rematch is again 7 p.m. at the LaHaye Ice Center, when fans are encouraged to bring in shoe boxes packed with supplies for children around the world in support of Samaritan's Purse and Operation Christmas Child.