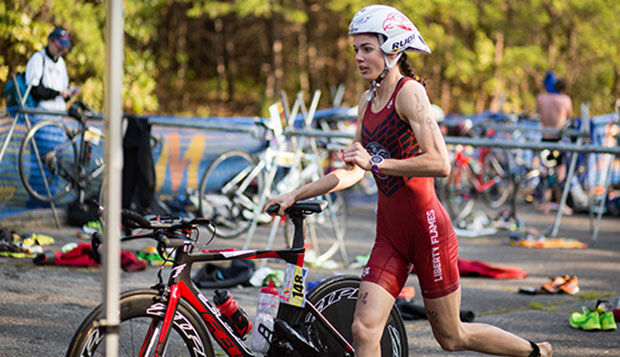 "What a way to finish an incredible fall season," Flames third-year Head Coach Parker Spencer said, noting that Liberty placed fourth behind Navy, Queens of Charlotte (N.C.), and Virginia in both the men's and women's overall standings.

"We had awesome weather and it was just a really fun day on a really fun course," Merryman added of the Olympic-distance route that featured a 1.5-kilometer swim, a 24-mile cycling stage, and a 10K run.

On Wednesday,  Spencer confirmed that Liberty will continue to host the MACTC championships for the next three seasons, renewing its contract through 2019.

Out of 110 men's participants Saturday, Liberty placed six triathletes in the top 50 — twice as many as in last year's race — led by Sonnery-Cottet's second-place performance in 1 hour, 57 minutes, 33 seconds. He trailed only Marymount's Collin Chartier (1:54:38), who moved into the lead on the bike and overtook Sonnery-Cottet for the individual series points lead with the win.

"I had a good swim and came out of the transition area in first place, but after the bike phase, I didn't have the legs to keep up with (Chartier) in the run," said Sonnery-Cottet, who is training for the French National Championships in June.

Fellow freshman teammate and roommate Sam Blackmon, a first-year triathlete with a running background, was the second Flames finisher (27th overall) in 2:12:09.

"It was a tough race," Blackmon said. "Usually, I'm strongest in the swim but I got boxed in and knocked down in the swim and kept swallowing water. It was tough to recover from that."

"I definitely make up time on the bike and the run is my best part," Merryman said. "Those girls are very fast, so they definitely pushed me."

Bonney had to be treated by Liberty Club Sports Coordinator of Athletic Training Angie Witt  immediately after the race after throwing up twice — once in the swim and once on the run.

"But she still killed it, so it was very impressive," Merryman said. "I had the lead for a little bit, but then she passed me at the start of the run."

Graduate Rachel Walters, who introduced Merryman to the sport just two years ago, was the second Lady Flames triathlete to complete the course, 55th overall in 2:45:26. 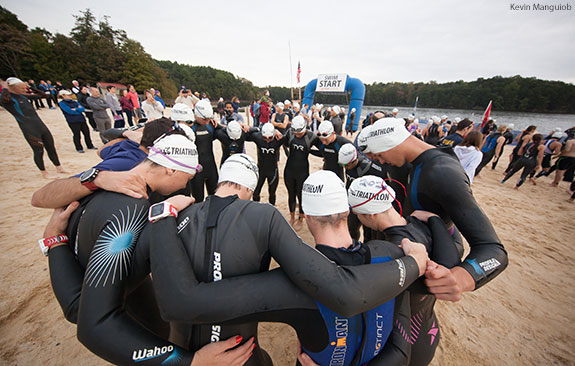