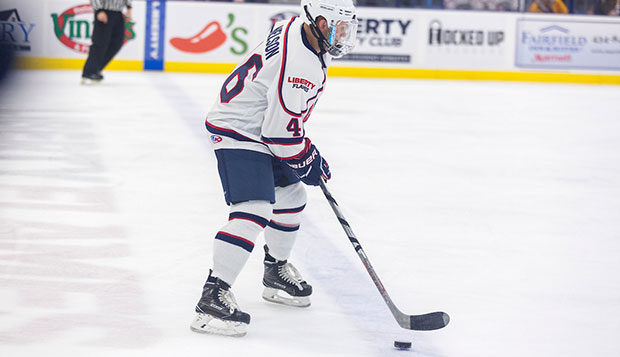 Liberty freshman defenseman Garrett Nelson scored his first two goals from just inside the blue line, giving the Flames an early lead before netting the equalizer midway through the third period, Friday night at the LaHaye Ice Center.

Perhaps one of the most unlikely of heroes, Liberty University's ACHA Division I men's hockey freshman defenseman Garrett Nelson notched a hat trick on three power-play goals in his second game in a Flames jersey, Friday night at the LaHaye Ice Center.

He singlehandedly sparked the attack as Liberty produced four goals in the final 10 minutes of play to overcome a 2-1 deficit and pull away for a 5-2 triumph over West Chester (Pa.) in its Eastern States Collegiate Hockey League (ESCHL) debut.

"Garrett's a guy who's worked hard since he got here and he worked hard to get here," Flames Head Coach Kirk Handy said of the late-summer addition who didn't score a goal in two seasons of junior hockey in Bismarck, N.D.

The Flames (2-0-0, 1-0-0 ESCHL) got on the scoreboard first, capitalizing in the final seconds of the game's first power play when Nelson, assisted by sophomore forward Colt Steele, threaded a wrist shot from the blue line that glanced off the inside of the left post past West Chester goalie Mike Rice with 13:52 left in a physical first period.

Liberty ended the first period two men down after freshman forward Andy Clarke was called for checking a West Chester player over the boards between the teams' benches with 28 seconds remaining. At the same time, sophomore forward Zak Hayes was ejected for fighting after a check on another Golden Rams player in the corner on Liberty's end. Then, in the final second of the period, freshman defenseman Chayden Lauber was called for a high check against the boards behind the Flames' cage, putting West Chester on a five-on-three to start the second period.

A minute and 20 seconds into the second, with less than 10 seconds left on the first penalty, Golden Rams freshman forward Jake Horacek skated in from the right crease and lifted a backhand over the sick of Liberty senior goalie Matt Pinel, tying the contest. Less than two minutes later, with the teams back at even strength, right wing Mickey McShane took a short pass from defenseman Bill Swahl and lifted West Chester (0-1-0, 0-1-0) to a 2-1 lead by flicking a shot from between the circles that found the five-hole.

Later in the period, Liberty's penalty kill unit extinguished a second five-on-three opportunity for the Golden Eagles to keep the Flames within one goal going into the third.

"That was a big momentum-changer," Pinel said. "We were just working hard and getting the puck out and we got it done. It was a big improvement (on defense) and an important game to come out and win our first league game."

Nelson netted his second goal midway through the final stanza from about the same spot as his first, receiving a feed from freshman defenseman Matt Cruickshank at the center of the blue line and launching another wrist shot, this time sneaking it through traffic into the top right corner of the net past Smith, knotting the score at 2-2 and igniting the College For A Weekend (CFAW) crowd.

"It's a great atmosphere here and my teammates put me in position to shoot it, so it's all on them, not me," Nelson said.

With Liberty back on the man advantage, Nelson nearly rang up another goal from around the same spot, with his blue-line shot clanging off the lower left post. Moments later, Nelson polished off his hat trick and gave the Flames their first lead since early in the second period when he took an outlet pass from Cruickshank and lifted a shot from deep in the right circle over a West Chester defenseman, again beating Smith top shelf for the game-winner with 3:40 to go.

"I was proud of our guys," Handy said. "There was a lot of tenacity and a lot of stick-to-it-iveness, Our guys battled hard and kept doing the things we were asking them to do. They didn't get away from the game plan that much. We believed it was going to result in a good thing for us. Our sticks started to come alive out there. I really like our guys, our group in there and I'm glad we stuck with it tonight."

Just six seconds after the ensuing faceoff, another freshman forward, Jamie Crane, converted his first goal in a Liberty uniform unassisted from short range in the left slot. Finally, after the Golden Rams pulled Smith for the final minute of play for a six-on-four advantage, Flames senior Grant Garvin was credited with his third goal of the season, and first of the night, when a West Chester player slid his stick in front of the puck on what would have been an empty-netter on a breakaway for the final score.

Both teams were called for six penalties while Liberty outshot West Chester 62-18, with Smith making 57 saves to keep the Golden Rams in the game.

Handy hopes to use the same formula to complete the sweep in Saturday's rematch, set for 3 p.m. back at the LaHaye Ice Center.

"We just go back out with the same game plan we had tonight and see what tomorrow produces," he said.