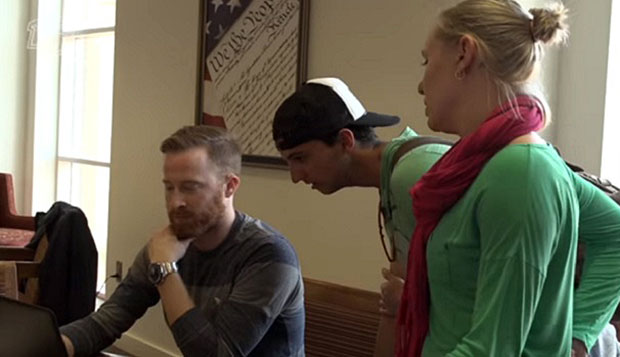 Incorporating a tutoring and mentoring program patterned after that used by its Athletics Department, Liberty University's Club Sports staff has helped enhance its student-athletes' academic performance significantly in recent semesters.

"It's a big reason why our student-athletes have done so well in the classroom, which is one of the most important things to us," said Kirk Handy, the Flames' ACHA Division I men's hockey head coach and director of athletics for Club Sports.

The overall grade-point averages (GPAs) for the Flames' 500-plus Club Sports student-athletes rose significantly this past fall compared to the previous two semesters — from 2.80 in Fall 2014 and 2.88 in Spring 2015 to 3.09. Cumulative GPAs during that time increased from 2.93 to 3.09.

"We have a goal to get every team's average above a 2.5 GPA and this first semester we hit that, so I'm really impressed," said Sarah Morris, Club Sports' academic coordinator, working under assistant director Tatiana Payne.

They have been assisted by Donna Holland, a professional advisor with the College of Applied Studies and Academic Success (CASAS), and Sarah Boettger, an adjunct professor who heads up a College Learning Strategies (CLST) mentorship program.

"Just being there for students and giving them an accountability system has helped," said Morris, who targeted 106 student-athletes with GPAs below 2.5 entering the fall semester, a number that dropped to 72 this spring. "Giving them the freedom to set their own schedule and being able to monitor them has been a crucial step in their turnaround."

Handy said the staff have implemented improvements in the tutoring program that have had positive impacts on student-athletes' study techniques.

"One of things we did was we went back and made some good changes with our study hall to make it more effective," he said. "That's a big thing for us, not only making it required, but doing it in an effective way."

While Club Sports currently uses the commons area located on the second floor of the Jerry Falwell Library for study hall sessions from 12:30-9 p.m., starting this fall, it will have new office space available for study hall, tutoring, and mentoring in the recently expanded LaHaye Ice Center, where the Club Sports offices are located.

Morris, a former member of the crew team who served as its head coach from 2014-15, can personally relate to Club Sports student-athletes and their coaches.

"It's definitely a good perspective to have come from being a Club Sports athlete and then a coach, and now being on the administrative side, to better meet and understand what a student-athlete needs," said Morris, who majored in Exercise Science as an undergraduate and started pursuing her M.B.A. in February.

She said her primary role is as a liaison between the student-athlete and his or her coach with a focus on their academic performance.

"I monitor GPAs from semester to semester and weekly grades and can flag them and keep coaches up to date with their student-athletes' grades," Morris said. "I help in setting goals and the coaches have stepped up to work with these plans and that's what's paid off. If a coach has an issue, I tell them this is what I can provide and help in connecting those dots along the way."

She said the programs help instill time-management skills and help student-athletes to plan ahead.

"We push them for a high level of success and want them to keep on improving and achieving more than they thought they could," Morris said. "I do strive for a student to be as independent as possible, but to be equipped to do so is a huge part in the journey. It would be wonderful to see every team succeeding at the highest level in both academics and their sport and always striving to improve."

"Balancing school and working for Club Sports as well was playing hockey has definitely been challenging," said Kerr, who serves as Liberty's hockey recruitment coordinator while working on his master's degree in Business Administration (M.B.A.). "Sarah Morris puts a lot of work in to make sure students are prepared and have all the resources they need, so that every student-athlete has every opportunity to succeed in whatever field they plan to go (after graduation)."

Men's Ultimate had the highest cumulative GPA (3.52) of any Club Sport after this past fall while the two teams with the largest improvements from the end of last spring to the beginning of this spring semester were paintball and wrestling, with GPA increases of 0.64 and 0.63, respectively.

Payne, head coach of Liberty's synchronized skating team which raised its cumulative GPA to 3.46 this past fall, is involved in the organizational side of the academic enhancement program. She said the department as a whole has benefited from it.

"We're pleased with the success that we've seen," Payne said. "Our goals as we continue will be to see the overall GPA continue to increase."

The mentoring and academic advising aspects of the program have helped students improve relationship-building and networking skills and more effectively map out their career strategies.

"Sarah Morris has done an excellent job of making the program play out," Payne said. "Sarah Boettger has been a huge help to our program and support for our student-athletes and Donna Holland has been extremely helpful in making sure our athletes are educated on what they can do with their degrees."

"It's a fantastic support system," he said. "We want them to be prepared to succeed (academically and professionally) and it guides them and provides a structure, and an accountability system, for them to be able to succeed in whatever career field they choose."