Flames soar to seventh, best ever in Championship Flight 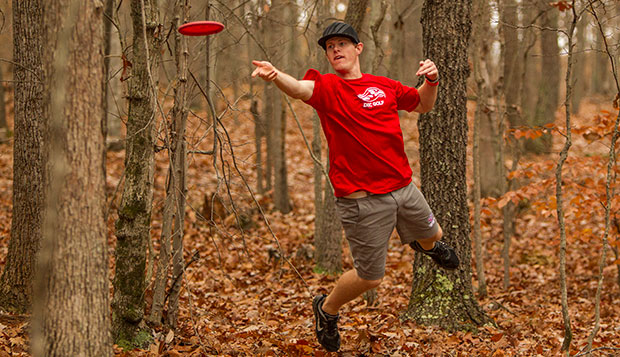 Liberty senior Lance Brown came in sixth at 10-under par through two rounds of singles and Friday's 10-hole finals.

Brown shot rounds of 56 on Thursday and 52 on Friday before carding a 34 in Friday's 10-hole final for a 10-under-par total of 142, earning first-team All-American status.

"It was our best overall all-across-the-board nationals tournament ever," Flames Head Coach Steve Bowman said. "We moved up two places against some pretty strong competition. If we had really played well, we could have been right there with NC State, guys we compete with a lot during the year. But overall, the guys played pretty solid."

Individually, while no other Liberty player reached the finals, Brown was complemented by consistent outings from his teammates — freshman Ryan Shumate, who shot 1-under 120 through two rounds of singles play, and graduates Daniel Ballard (1-over 122) and Devin Swartz (9-over 130).

The Flames also took sixth out of 20 teams in the men's First Flight standings, paced by top-20 individual performances (out of 78 players) from junior Jon Younce (6-over 117) and sophomore Bridger Melton (7-over 118). After winning the overall title in 2014, Liberty finished third in the Second Flight standings behind Mississippi State and Minnesota. Liberty was led by senior Hunter Bass's even-par singles play, which put him in third place individually, and junior Jesse Edgin's 5-over fifth-place finish.

"Our doubles play was pretty good today," Bowman said. "Our First Flight group was eight-under for the day today to make a big jump up, but our Second Flight was in second place going into it the last round of doubles and shot a two-under while (Minnesota) shot five under and passed them."

In the women's open competition, seniors Hannah Croke and Sarah White both reached the eight-player finals, placing fourth and seventh overall out of 19 players to pace the Lady Flames to a third-place team showing, bettering their fourth-place finish from 2014, the last time they entered a complete foursome.

Croke (15-over 154) was in second place overall entering the finals, when she carded a 42 to slip to fourth, still high enough for All-American honors.

"We're graduating three girls off the team and two to three guys, but the younger players got a lot of experience this year and I'm excited about the future," Bowman said. "To gain experience and build excitement at a national setting like this, and to be competitive at all levels, and to see that drive they have to finish out their rounds well, (the returning players) should come back quite a bit stronger." 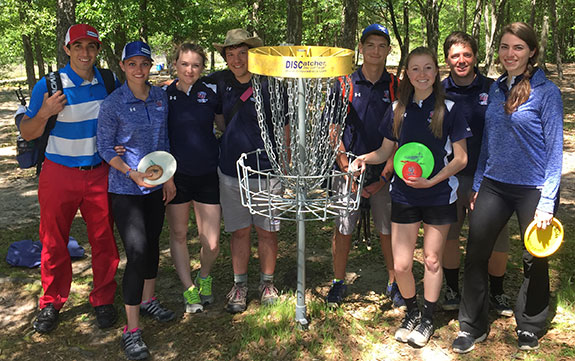 Hannah Croke (left), who placed fourth overall, poses with Paul McBeth, the No. 1-ranked men's
player in the world, and her Lady Flames teammates, who scored a third-place national finish.