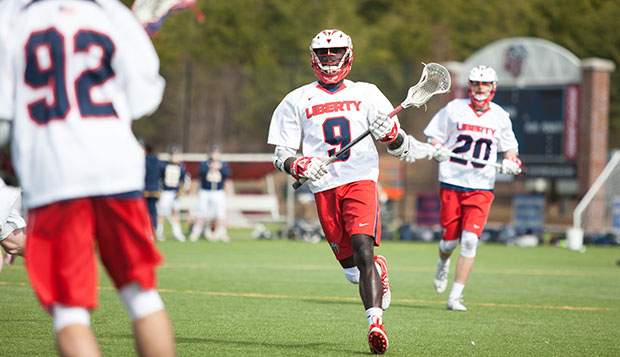 Liberty senior midfielder Charles Fianko won 33 of 37 faceoffs at Florida State, which scored many of its goals on transition.

In a back-and-forth battle between top-25 MCLA Division I programs, Liberty University's men's lacrosse team scored three unanswered goals in the final five minutes to rally within one goal against host Florida State on Thursday night. The Flames (4-3), who moved up three spots in this week's poll to No. 16, had a chance to tie the No. 22 Seminoles (9-1) after forcing a turnover and calling a timeout with 13 seconds remaining in regulation, but time ran out before they could net the equalizer in a 17-16 setback.

"We wanted to win, but this team definitely got stronger as a result of this game," he added. "Potentially, we will have to face them again (in the SELC Division I tournament) and hopefully, we can beat them then, when it really matters."

Liberty came into the contest having won three of the teams' four previous meetings, including ending FSU's season in the SELC playoffs the past two seasons. But the Flames slipped to 0-2 against the Seminoles in Tallahassee, Fla., after losing to them on their spring break road trip in 2014.

"We ended Florida State's season two years in a row so they definitely had something to prove," McQuillan said. "It was a very close game. We gave them our best shot. Unfortunately, we ended up on the short end of the stick, but the whole environment was a perfect setting for a lacrosse game and it was a lot of fun to be a part of."

Senior midfielder Charles Fianko gave the Flames the upper hand by winning 33 of 37 faceoffs, providing his teammates an advantage in time of possession and forcing the Seminoles to score many of their goals on transition.

"He was fantastic," McQuillan said. "He did everything he needed to do and we weren't able to turn that into a win."

Matt Nichols made 15 saves before being replaced by fellow freshman goalie Braydon Harrimon in the final minute, when the Flames were able to press out and force a turnover before calling their last timeout to set up a final shot.

Goals by Bernardo and Gregory put the Flames on top 2-0 early before the Seminoles netted three in a row. Bernardo retied it at 3-3 before FSU went back on top when it scored on a pass from behind the goal that bounced off the back of a Liberty defender, who inadvertently redirected it past Nichols.

Then, a questionable two-minute penalty for what McQuillan thought was a clean check on FSU's faceoff man put the Flames a man down for two minutes and the Seminoles scored three unanswered goals to seize a 7-3 advantage before Bernardo and Mrakovich set up Miller for back-to-back inside scores that stopped the bleeding.

Liberty will conclude its three-game spring break road trip Friday night against South Florida, a team the Flames rallied to beat, 10-9, two years ago in Tampa, Fla. Faceoff is set for 7 p.m.