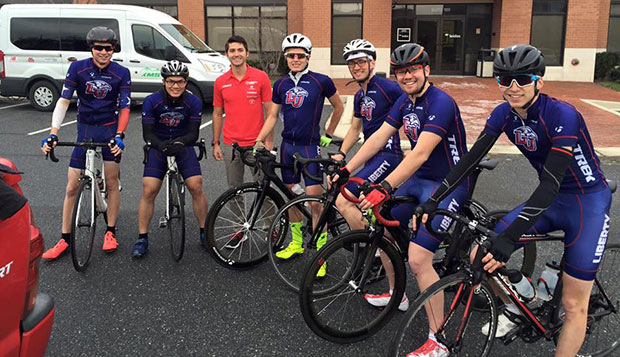 "Most of the time, they're doing two races in a weekend so the amount of experience they're getting is great," Liberty Head Coach Parker Spencer said. "That's going to help them with the learning curve."

At North Carolina and Duke, Jake King placed second in the Men's Collegiate A road race and first in the Bull City Grand Prix criterium, respectively, while fellow sophomore Marie Sonnery-Cottet finished third despite crashing in the road race and fourth in the criterium.

"Marie was fine and her bike was fine," Liberty Head Coach Parker Spencer said. "Unfortunately, crashes are a part of the sport of cycling. When you get that many people going that fast and hard, hauling in a tight group, someone's bound to go down."

"Ethan worked a lot for Bryan and led a little bit of the race," Spencer said. "Bryan showed a lot of potential, and so did Ethan."

Schick led Liberty in the Men's C criterium with an 11th-place finish followed by Tran (16th), Krohn (19th), and Fouse (25th). Krohn would have played higher had he not been involved in a wreck.

"There are a lot of moving parts during a criterium, which is very fast-paced and very technical," Spencer said. "(Krohn) went down and had a hard time catching back up. It was a good learning experience. You have to learn bike-handing skills and about staying in a pack with their speed."

Krohn upgraded from the C to the B races this past weekend in Maryland, where he placed fifth in both the 40-minute Route One Rampage criterium held in Hyattsville, Md., and the 31.5-mile Gateway Circuit Race in Columbia, Md. Schick finished third in the 30-minute men's C criterium, followed by graduate Joseph Anderson in fifth.

"That course, right outside of Washington, D.C. is extremely technical and it was eye-opening, showing us that we need to work on some fast-paced cornering," said Spencer, who expects Saturday's road race hosted by Virginia Tech to be hillier than Maryland's but Sunday's criterium in downtown Blacksburg, Va., to be not quite as tight.

After three race weekends, the Flames are ranked third in the ACCC men's team standings, behind Virginia Tech and Navy.