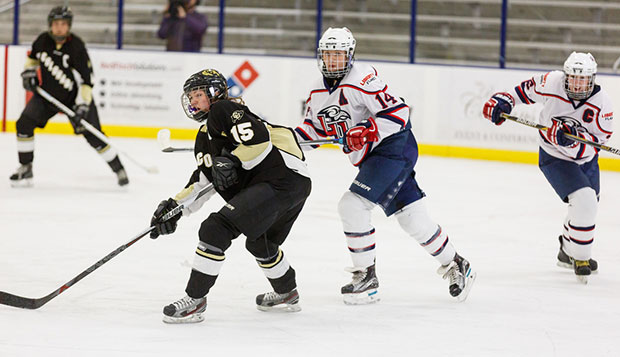 In a game that resembled a seismograph — with spikes and lulls in intensity throughout — Liberty University's ACHA Division I women's hockey team rode the final waves of a Colorado Buffaloes earthquake Friday night and held on to a narrow, heart-pounding 3-2 victory.

Not counting a Nov. 21 forfeit to Grand Valley State, the Lady Flames (9-2-1) have not lost since Sept. 26, and have remained at No. 1 through two ACHA DI polls. Colorado (9-6), ranked 13th, had a two-game win streak snapped by Liberty Thursday night 7-1. But if the Buffaloes were the underdog in the series, it is only because they were nipping at the defending ACHA DI national champion Lady Flames' heels the entire time at Liberty's LaHaye Ice Center.

It was the Buffaloes who struck first Friday. After about 10 minutes of back-and-forth play, with neither team showing an advantage, Liberty showed some promise. The host Lady Flames killed two penalties — one in the early minutes and another just before Colorado would swing the momentum in its favor. The Buffaloes lit the scoreboard first with 4:26 left in the opening period, on a goal by Kathleen Ash.

Liberty freshman wing Lauren McDonald, who had been showcasing her explosive speed throughout the period — seemingly trying to see how many Buffaloes she could outmaneuver and torch in one go — looked determined and able to net the equalizer after bursting through Colorado's defense, only to be tripped en route to her showdown with the goalie. Liberty failed to take advantage of the ensuing advantage, not really creating opportunities on the power play and managing only a single shot at freshman Colorado goalie Natalie Warnes.

Straightaway in the second period Liberty went on the offensive, maintaining constant pressure on Warnes for most of the second frame. It didn't take long for the gunslinging to pay off as Nicole Douglas, a junior, sent home a feed from senior captain Carrie Jickling, who crossed the puck across the net from behind, giving her teammate an open stick-side slam 3:18 into the period.

The Buffaloes turned up the aggression factor a notch for the remainder of the second, playing some scrappy hockey and earning each one of their five shots on goal, which Hutton kept out of the net. The Buffaloes turned the momentum in their favor for most of the final five minutes of play before Liberty went on a late offensive, firing off two shots, by Catherine Burrell and Jickling, respectively, that each sailed right. Though Liberty had plenty of good looks, with 16 shots on goal in the period, the Lady Flames couldn't seem to put one home.

Three early shots on goal for the Lady Flames seemed to indicate the home team was commanding the momentum, if only for a moment in the fierce melee, but with 14:31 on the clock the Buffaloes put the lights back on their side of the scoreboard. This time, Ash fed Marisa Danos, a sophomore forward, from behind the net and Danos found the five hole to put the charging Buffaloes back on top.

The shift in Colorado's favor was short-lived, however, as Liberty mounted an assault in response, equalizing the score in less than 20 seconds at 14:16. McDonald went on the aggressive from behind and graduate student Nikki McCombe buried the rebound at close range.

For the remainder of the match, the two teams would battle to command the ice, slicing back and forth, responding to and mounting attacks accordingly. A double penalty gave McDonald more opportunity to showcase her blinding speed in some four-on-four action. Though Liberty did not capitalize, the Lady Flames dominated the puck for most of the first minute and a half of those two minutes.

Just under seven minutes to go, Liberty iced the victory after senior defender Madison Fischer fired from the bottom of the left circle, assisting sophomore forward Clarissa Tipping who blasted home the rebound.

Late in the contest, Colorado emptied its net for a man advantage, but Liberty's defense buckled down during the intense finish and the Buffaloes only managed one shot on goal before time would expire.

Freshman Kelly Hutton took the start and the win for Liberty between the pipes.

After the game, Liberty head coach Paul Bloomfield surveyed the ice with a calm sense of relief about him.

Colorado's fierce intensity clearly kept the No. 1 Lady Flames on the tips of their skates, but experience won out (the Buffaloes have 12 freshman on their roster).

"Our chemistry really helps us out in games like this," Bloomfield said. "(The Lady Flames) are used to playing together. They don't quit. They have experience. That is one of the nice things about being a little older."

Liberty hosts the Lady Ice Lions of Penn State on Sunday at 10 a.m., the Lady Flames' final matchup before the third rankings are released.